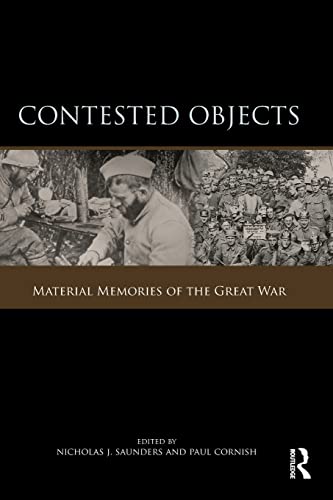 Contested Objects breaks new ground in the interdisciplinary study of material culture. Its focus is on the rich and varied legacy of objects from the First World War as the global conflict that defined the twentieth century. From the iconic German steel helmet to practice trenches on Salisbury Plain, and from the 'Dazzle Ship' phenomenon through medal-wearing, diary-writing, trophy collecting, the market in war souvenirs and the evocative reworking of European objects by African soldiers, this book presents a dazzling array of hitherto unseen worlds of the Great War.

The innovative and multidisciplinary approach adopted here follows the lead established by Nicholas J. Saunders' Matters of Conflict (Routledge 2004), and extends its geographical coverage to embrace a truly international perspective. Australia, Africa, Italy, Germany, France, Belgium and Britain are all represented by a cross-disciplinary group of scholars working in archaeology, anthropology, cultural history, art history, museology, and cultural heritage. The result is a volume that resonates with richly documented and theoretically informed case studies that illustrate how the experiences of war can be embodied in and represented by an endless variety of artefacts, whose 'social lives' have endured for almost a century and that continue to shape our perceptions of an increasingly dangerous world.

NLS9780415852937
9780415852937
0415852935
Contested Objects: Material Memories of the Great War by Nicholas J. Saunders (University of Bristol, UK)
Nicholas J. Saunders (University of Bristol, UK)
New
Paperback
Taylor & Francis Ltd
2013-04-15
10
N/A
Book picture is for illustrative purposes only, actual binding, cover or edition may vary.
This is a new book - be the first to read this copy. With untouched pages and a perfect binding, your brand new copy is ready to be opened for the first time
Trustpilot