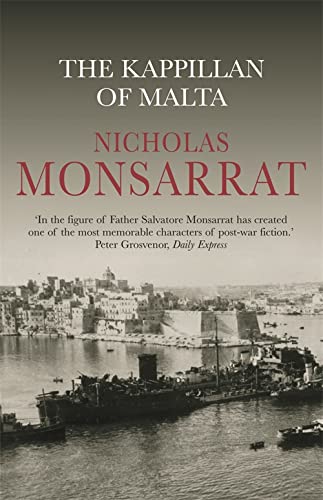 The Kappillan of Malta
by Nicholas Monsarrat

The Kappillan of Malta Summary

The Kappillan of Malta by Nicholas Monsarrat

Father Salvatore was a simple, lumbering priest, a Kappillan serving the poor Valetta, when war came out of the blue skies to pound the island to dust.

Now amid the catacombs discovered by a chance bomb, he cared for the flood of homeless, starving, frightened people who sought shelter from the death that fell unceasingly from the sky.

His story, and the story of Malta, is told in superbly graphic pictures of six days during the siege. Each of those days brought forth from the Kappillan a message of inspiration to keep them going - the legendary tales of six mighty events of Malta's history which shone through the centuries and gathered them together in a fervent belief in their survival.

Customer Reviews - The Kappillan of Malta

Nicholas Monsarrat was born in Liverpool in 1910, and was educated at Trinity College, Cambridge. He served in World War II, first as a member of an ambulance brigade and then as a member of the Royal Naval Volunteer Reserve. His lifelong love of sailing made him a capable naval officer, and he served with distinction on a series of small warships. Resigning his wartime commission in 1946, Monsarrat entered the diplomatic service. He turned to writing full time in 1959, settling on the Mediterranean island of Gozo. He died of cancer in 1979 and was buried at sea from a destroyer, off Portsmouth.

GOR001239827
The Kappillan of Malta by Nicholas Monsarrat
Nicholas Monsarrat
Cassell Military Paperbacks
Used - Very Good
Paperback
Orion Publishing Co
2001-03-08
464
0304358444
9780304358441
N/A
Book picture is for illustrative purposes only, actual binding, cover or edition may vary.
This is a used book - there is no escaping the fact it has been read by someone else and it will show signs of wear and previous use. Overall we expect it to be in very good condition, but if you are not entirely satisfied please get in touch with us.