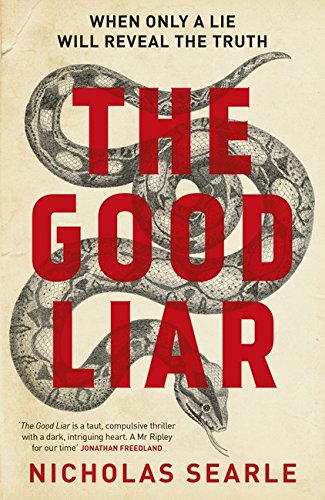 The Good Liar
by Nicholas Searle

Out of Stock
$18.49
inc. GST
Roy is a conman living in a leafy English suburb, about to pull off the final coup of his career. He is going to meet and woo a beautiful woman and slip away with her life savings. But who is the man behind the con and what has he had to do to survive this life of lies? And why is this beautiful woman so willing to be his next victim?
Very Good
Only 0 left

The Good Liar by Nicholas Searle

This is a life told back to front.

This is a man who has lied all his life.

Roy is a conman living in a leafy English suburb, about to pull off the final coup of his career. He is going to meet and woo a beautiful woman and slip away with her life savings.

But who is the man behind the con and what has he had to do to survive this life of lies?

And why is this beautiful woman so willing to be his next victim?

An assured thriller debut in the footsteps of le Carre, Highsmith and Rendell...The Good Liar makes you want to experience Nicholas Searle's next trick * Guardian *
This is set to be one of the books of the year that will get everyone talking....If you go in with absolutely no preconceptions, you will have your socks knocked, nay, blown off * Stylist *
As the tension mounts, the reader is kept guessing: is Roy going to be rumbled? Is Betty as guileless as she seems? The final denouement is a real cracker, and this reader at any rate was led through the nose to the very end. Added to the fiendishly clever plot, Searle's writing is both drily amusing and elegantly crafted. An absolute treat of a book. * Daily Mail *
A part-thriller, part-human condition novel that packs a tremendous punch * Financial Times *
The Good Liar is a taut, compulsive thriller with a dark, intriguing heart. A Mr Ripley for our time -- Jonathan Freedland
Twists and turns galore! * The Bookseller *
All the ingredients are in this book...You're in safe hands with Searle's elegant writing * The Times *
One of 2016's most intriguing debut novels * Independent *
I was engrossed by Nicholas Searle's story of Roy, a conman out for one last scam, and Betty, a wealthy widow, and the perfect mark. The plot unfolds to a payoff as inevitable as it is shocking. A superb thriller and a truly compelling read. * Ruth Ware, bestselling author of 'In a Dark, Dark Wood' *
An incredibly dark, taut thriller...it deserves to be a bestseller. Think of Ruth Rendell morphing into John le Carre * Daily Express *
Searle's relish in telling his dark tale and his taste for bitter irony will be savoured by anybody missing their annual fix of Ruth Rendell * Sunday Express *
Searle shows a gift for complex plotting. The Good Liar is packed with secrets and surprises, bluffs and double-bluffs * Daily Telegraph *
A perfectly entertaining way to spend a few hours * Sunday Times *
A wily tale of a much larger, more traumatic and multifaceted deception than initially anticipated... * The Independent *
You won't know who to trust in this compulsive, con-man thriller, where nothing is at seems * Heat *
A debut novel guaranteed to keep you guessing * Shortlist *
A confident debut...an easy page-turner * Grazia *
A cracking read -- Graham Norton, BBC Radio 2
What a clever and menacing novel The Good Liar is. I was gripped and horrified in equal measure and the ending knocked me sideways! I can't wait for everyone to read the book so I can talk about it * Nina Stibbe, bestselling author of 'Love, Nina' and 'Man at the Helm' *
An assured debut from an intriguing new writer * Mail on Sunday *
A cleverly constructed novel * Metro *
I was still hoodwinked * Spectator *
A total cracker of a plot * Saga *
A beautifully-written novel of suspense and intrigue dealing with sin, salvation, and survival * Huffington Post *

Nicholas Searle is the author of three novels. His first novel, The Good Liar, was a Sunday Times bestseller and was shortlisted for the CWA John Creasey New Blood Dagger for the best debut crime novel. Before becoming a writer, he enjoyed a long and successful public service career in intelligence and security. He lives in Yorkshire.

GOR007188269
The Good Liar by Nicholas Searle
Nicholas Searle
Used - Very Good
Hardback
Penguin Books Ltd
2016-01-14
288
0241206936
9780241206935
N/A
Book picture is for illustrative purposes only, actual binding, cover or edition may vary.
This is a used book - there is no escaping the fact it has been read by someone else and it will show signs of wear and previous use. Overall we expect it to be in very good condition, but if you are not entirely satisfied please get in touch with us.