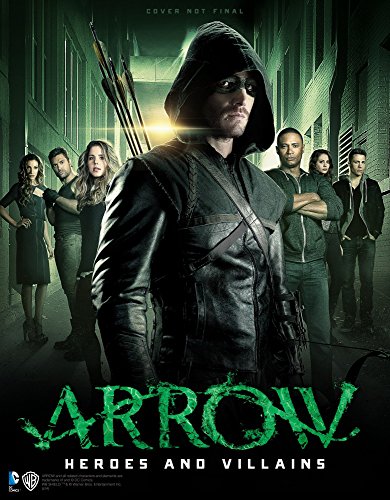 Used Price
$19.99
inc. GST
Free Shipping in Australia
Follows billionaire playboy Oliver Queen, after being shipwrecked on a hostile island for five years, he returns home determined to right the wrongs in Starling City by adopting the guise of the vigilante Arrow. This is a guide to the characters in the show, their alter egos, hidden agendas and relationships.
Very Good Good

Arrow - Heroes and Villains is a companion to the hit Warner Bros. TV show Arrow, to be airing its third season on The CW network. Based on the DC Comics character, the American TV series Arrow follows billionaire Oliver Queen (Stephen Amell - Heartland, Private Practice) who, after spending five years marooned on a remote island, returns home and secretly creates the persona of Arrow to right the wrongs of his family and fight the ills of society. Arrow - Heroes and Villains is a comprehensive character guide to the hit Warner Bros. TV show Arrow. Featuring in-depth character breakdowns of Oliver Queen - the billionaire turned hooded vigilante, Laurel Lance - attorney and former girlfriend of Oliver, Slade Wilson - the character based on DC Comics' Deathstroke, and many, many more. Companion book to the hit Warner Bros. TV series Arrow, starring Stephen Amell (Private Practice, Heartland) and airing on The CW network The critically acclaimed action series was also the #1 series on The CW network in its premiere season with Total Viewers The series delivered over 4.5 million Total Viewers in Live+7 ratings in its first season The Season 2 premiere was the #1 premiere of the season on The CW with nearly 3 million Total Viewers ARROW and all related characters and elements are trademarks of and (c) DC Comics.

"Arrow: Heroes and Villains is the kind of book I would have been after for my favorite shows as a kid." - Borg.com

"A great way to catch up on the characters of the show and where they stand as of the end of the second season of Arrow." - Science Fiction.com

"Do not hesitate, put this in your quiver immediately." - Entertainment Buddha

"We really enjoyed the fun fact sheets for each character which allowed readers to gain more insight into their relationships, alias and comic history. If you are a fan of the television show Arrow then the companion book Arrow: Heroes and Villains is a must-buy!" - Bio Gamer Girl

"The pictures are plentiful, showcasing specific moments from the show and giving a visual look into the characters." - Fangirl Nation

Nick Aires is the pen-name of Nick Andreychuk, a seasoned fiction and non-fiction writer in the genres of fantasy and horror, contributor to the official Supernatural Magazine, and author of the Official Companions to seasons 1-7 of Supernatural. He has also worked as an extra on numerous Vancouver-based TV shows.

GOR006527215
Arrow - Heroes and Villains by Nick Aires
Nick Aires
Used - Very Good
Paperback
Titan Books Ltd
2015-02-03
176
1783295236
9781783295234
N/A
Book picture is for illustrative purposes only, actual binding, cover or edition may vary.
This is a used book - there is no escaping the fact it has been read by someone else and it will show signs of wear and previous use. Overall we expect it to be in very good condition, but if you are not entirely satisfied please get in touch with us.