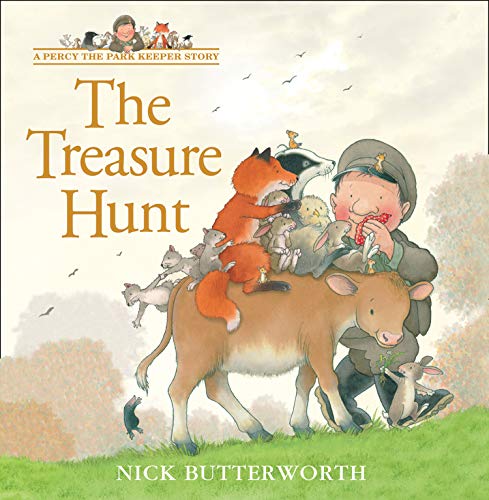 The Treasure Hunt
by Nick Butterworth

Percy the park keeper is planning a treasure hunt. All his animal friends are to follow a trail of clues around the park and the first one to reach the end will find the treasure! The animals are so excited they can't wait for the hunt to begin!

`A lovely book to share at bedtime' Children's Book News

`... it's just right for reading aloud on a cold day' Books for Keeps

The Rescue Party:
`...it's good for reading aloud to under-fives, and later the six-pluses will still want to read it themselves.' The Independent on Sunday

After the Storm:
`...look no further for the best present for any child from two to six.' Susan Hill, The Sunday Times

Nick Butterworth was born in London and grew up in a sweet shop in Essex. He worked for various major graphic design companies before becoming a full-time author and illustrator. Among his picture books are Thud!, QPootle5, Jingle Bells, Albert le Blanc, Tiger and The Whisperer, winner of the Nestle Gold Award. But he is best known for his stories about Percy the Park Keeper, which have sold more than 9 million copies worldwide. Percy has also appeared in his own television series.

GOR001215142
The Treasure Hunt (A Percy the Park Keeper Story) by Nick Butterworth
Nick Butterworth
A Percy the Park Keeper Story
Used - Very Good
Paperback
HarperCollins Publishers
2003-07-30
32
0007155174
9780007155170
N/A
Book picture is for illustrative purposes only, actual binding, cover or edition may vary.
This is a used book - there is no escaping the fact it has been read by someone else and it will show signs of wear and previous use. Overall we expect it to be in very good condition, but if you are not entirely satisfied please get in touch with us.