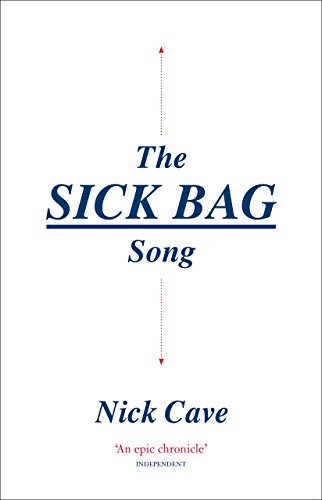 Out of Stock
$21.49
inc. GST
Romantic, poetic and heartfelt, Nick Cave's Sick Bag Song is a contemporary epic, somewhere between Fear and Loathing in Las Vegas and The Wasteland
Very Good
Only 0 left

The Sick Bag Song is an exploration of love, inspiration and memory. It began life scribbled on airline sick bags during Cave's 22-city journey around North America in 2014. It soon grew into a restless full-length contemporary epic. Spurred by encounters with modern day North America, and racked by romantic longing and exhaustion, Cave teases out the significant moments, the people, the books and the music that have influenced and inspired him, and drops them into his sick bag.

About as rock'n'roll as you can get . . . [The Sick Bag Song] is shot through with fantasy, fiction, apocalyptic musings and tall stories * * The Sunday Times * *
An epic narrative poem about his travels across North America . . . Cave is experimenting with a new literary form - a mash-up of prose, poetry, song lyrics and autobiography * * New York Times * *
Part tour diary and part free-ranging rumination on the business of performance. Capture[s] the mind-frazzling disorientation of 'the road' * * Guardian * *
A page turning mash up from the prince of darkness * * Independent * *
Lyrical, hallucinatory and laced with sly wit, The Sick Bag Song is a revelation and a pleasure -- Hari Kunzru
Nick Cave goes the distance with The Sick Bag Song * * LA Times * *
Mad and amazing -- Ian Rankin
Far from your typical diary; snapshots of mundane reality (traffic jams, reading in a park) melt into disturbing visions peppered with flashbacks from his childhood. There are heated exchanges between Cave and his muses, and unsettling encounters with a few of his musical heroes (Bryan Ferry, Bob Dylan) that cause Cave to ponder the "vampiric" nature of creativity * * Rolling Stone * *
The narrator's obsessive thoughts about his young self facing death juxtaposed with the illusions of fame . . . offer an interesting perspective on mortality * * Sunday Herald * *
Biblical, slightly manic and distinctly berserk; it's also touching, poignant and utterly absorbing -- Jason Steger * * The Age * *
The stories twist and turn like mad dash through the dark forest that is Nick Caves imagination. It's very revealing, but I guess it's too dreamlike to be called a diary or journal, and yet I came away understanding more about Nick Cave than ever -- Tom Odell

The lead singer of The Birthday Party, The Bad Seeds and Grinderman, Nick Cave has been performing music for more than 30 years. He has collaborated with Kylie Minogue, PJ Harvey and many others. As well as working with Warren Ellis on the soundtrack for the film of The Road by Cormac McCarthy and The Assassination of Jesse James by the Coward Robert Ford, he also wrote the screenplay for the film The Proposition. His debut novel, And the Ass Saw the Angel, was published in 1989 and was followed by the internationally bestselling The Death of Bunny Munro in 2009. Born in Australia, Cave now lives in Brighton.

GOR008018366
The Sick Bag Song by Nick Cave
Nick Cave
Used - Very Good
Paperback
Canongate Books Ltd
2016-03-03
128
1782117938
9781782117933
N/A
Book picture is for illustrative purposes only, actual binding, cover or edition may vary.
This is a used book - there is no escaping the fact it has been read by someone else and it will show signs of wear and previous use. Overall we expect it to be in very good condition, but if you are not entirely satisfied please get in touch with us.