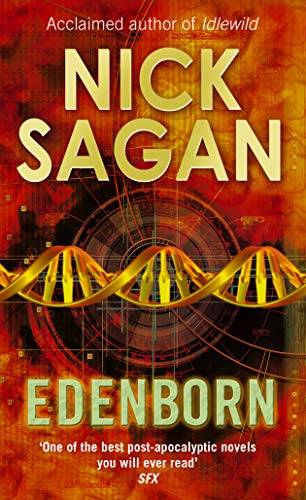 In Stock
$13.69
inc. GST
The survivors must work together, but to save the future Halloween must first let go of the past...
Thrilling, post-apocalyptic yet written with an arcing sense of wonder, EDENBORN is the next visionary chapter in the Idlewild story by one of speculative fiction's most exciting new voices.
Very Good
Only 2 left

It is 18 years after IDLEWILD and the survivors are now adults. A bitter and disillusioned Halloween has chosen to exile himself but his peers seek to repopulate the Earth and rebuild civilization. They are mankind's last, best and perhaps only hope. However an ideological split has divided them into two very different societies: one looks to resurrect the human race, the other to improve humanity via genetic manipulation. So a new generation of children is born, but as they mature it becomes clear that all is not well. Someone - or something - is moving against them, even as Black Ep, the plague that claimed billions of lives, returns in search of new victims. The survivors must work together, but to save the future Halloween must first let go of the past...
Thrilling, post-apocalyptic yet written with an arcing sense of wonder, EDENBORN is the next visionary chapter in the Idlewild story by one of speculative fiction's most exciting new voices.

'One of the best post-apocalyptic novels you will ever read...Edenborn's success lies in its ability to engage you on such a personal level. A sense of desparation and hope, of desolation and re-birth, fires the story along on a wave of uncertainty that makes for a gripping ride...such an exciting and original take...it is breathtaking' * SFX *
'Second novels are always tricky, particularly when they're part of a sequence, so it is a surprise that Edenborn, Sagan's follow-up to Idlewild, is better written and even more tightly plotted' -- Jon Courtenay Grimwood * GUARDIAN *

'Stunning...the novel contains some of the most poignant and moving scenes I've had the pleasure to read...I'm not going to hold back on this one, I believe that 'Edenborn' is the finest book that I have read this year. Idlewild was impressive but Sagan has beaten it with a work of such depth it positively echoes. It's one of those few books that I literally could not put down...Sagan is an adrenaline shot straight into the heart of SF. Do yourself a favour, don't miss these books'

* SFCROWSNEST *
'Sagan makes it look so easy...as the novel rolls on into its final chapters, it delivers a number of powerful emotional punches that really put the icing on the cake...another excellent character-driven work of literature' * INFINITY PLUS *
'A genuine page turner...a rollercoaster ride of fusion fiction' * NEIL GAIMAN *

The son of Carl Sagan and Linda Salzman, Nick Sagan is a graduate of UCLA Film School and has written for Hollywood, creating screenplays and television scripts. Edenborn is his second novel and a sequel to his first, the critcally acclaimed Idlewild, which is also published by Bantam Books. His third novel, Everfree, is now available from Bantam Press. Nick Sagan is married and lives in Ithaca, New York.

GOR001190626
Edenborn by Nick Sagan
Nick Sagan
Used - Very Good
Paperback
Transworld Publishers Ltd
2005-08-01
432
0553815989
9780553815986
N/A
Book picture is for illustrative purposes only, actual binding, cover or edition may vary.
This is a used book - there is no escaping the fact it has been read by someone else and it will show signs of wear and previous use. Overall we expect it to be in very good condition, but if you are not entirely satisfied please get in touch with us.