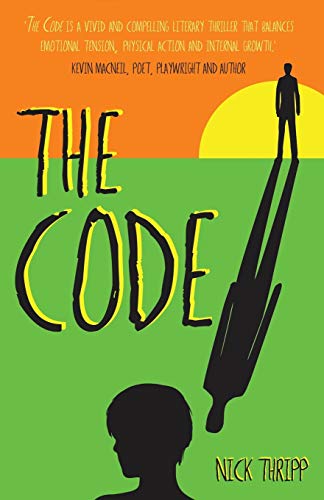 The Code
by Nick Thripp

Used Price
$28.49
inc. GST
Free Shipping in Australia
A fast-paced novel of revenge and rivalry where nothing is as it seems. Highlights themes such as the abuse of power in relationships, both personal and professional, and how easy it is `to live a lie'.
Reviews:
Trustpilot
Very Good

The Code by Nick Thripp

A fast-paced novel of revenge and rivalry where nothing is as it seems.
Highlights themes such as the abuse of power in relationships, both personal and professional, and how easy it is `to live a lie'.
Edgy and exciting, The Code focuses on three schoolboys and how one's deep grudge and hidden desire to get even with the other two changes the course of their lives forever. Featuring a clandestine liaison, professional manipulations and abuse, rivalry between sisters and an endless cycle of machinations and lies, the book combines the character development of literary fiction with the pace of a thriller. The ruthless and ambitious John Beart skilfully manipulates the nameless Narrator until he's in his professional thrall, trapping him there as the emotionally-charged plot charges toward its seemingly inevitable conclusion. Can anyone break free from the negative spiral before it's too late?
While The Code deals with serious subjects, such as Imposter syndrome, it's often very funny, if tinged with sardonic humour. The book's themes of unfulfilled love, sibling rivalry, revenge and the need to find personal fulfilment should strike a chord with readers, as will the unnamed narrator established as an `Everyman' readers can relate to.
`The Code is a vivid and compelling literary thriller that balances emotional tension, physical action and internal growth.' Kevin MacNeil, poet, playwright and author of `The Brilliant and Forever', `Stornaway Way' and `A Method Actor's Guide to Jekyll and Hyde'

Nick Thripp has lived in India, the Philippines and the United Kingdom. He graduated in English from Cambridge and has an MA in Creative Writing from Kingston University, London. He is also a short story and poetry prize winner. This is his debut novel.