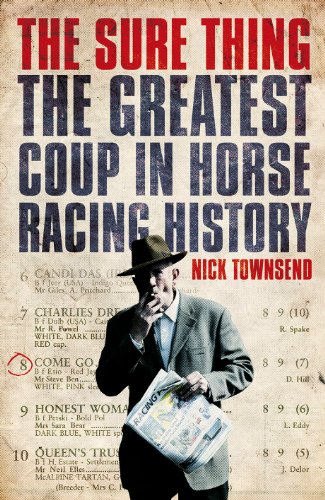 The Sure Thing
by Nick Townsend

Used Price
$44.99
inc. GST
Free Shipping in Australia
In the summer of 1975 Curley masterminded one of the most spectacular gambles of all time, with a racehorse named Yellow Sam, costing Irish bookmakers around GBP300,000; But challenges inspire Curley and he was determined to beat the system - again.
Reviews:
Trustpilot
Very Good

The Sure Thing Summary

The Sure Thing: The Greatest Coup in Horse Racing History by Nick Townsend

THE BOOKIES ALWAYS WIN. Yet, for over four decades Barney Curley has proved himself a rare exception. The country's most renowned and fearless gambler, a man who will back his judgement to win GBP100,000 and more on a single day, has consistently emerged triumphant from bloody skirmishes with the old enemy. In the summer of 1975 Curley masterminded one of the most spectacular gambles of all time, with a racehorse named Yellow Sam, costing Irish bookmakers around GBP300,000; the equivalent of some GBP2m today. No-one believed anything similar could be staged again this century. Bookmakers now have communications and technology in place to thwart any renewed attempts. But challenges inspire Curley and he was determined to beat the system - again. Thirty-five years later from his first coup, Curley set about staging an ambitious sequel to his Yellow Sam scheme. Curley has never divulged the full details of what happened. Now, for the first time, The Sure Thing reveals the complete story of the months of planning and preparation, with all the trials and tribulations, that went into the biggest organised gamble in racing history.

Customer Reviews - The Sure Thing

The Sure Thing Reviews

"Nick Townsend tells the story with panache, helped by a close acquaintance with the Irish mastermind of the scheme, Barney Curley, a name which bookmakers have had reason to curse on several occasions... It gets properly into its stride when it focuses on the coup, which in its innovative daring calls to mind The Italian Job." * Independent on Sunday *
"The full story of how the legendary gambler does it is unveiled. It helps if you know your way around racing, but if you don't this book will make you want to get clued-up fast." * Daily Sport *
"This is an enthralling read, extremely entertaining, and a revealing insight into one of horse racing's most colourful, and controversial, characters" * The Press *
"Fascinating... written with commendable skill and verve. It is a very readable book. Curley and his coups combine to make a unique story, well told." * Racing Post *
"This is a brilliant read. Love horse racing or not, you won't be able to put it down once the action gets going. I just can't wait for the BBC to snap up the rights." * Wexford People *

Nick Townsend was, for many years, a sports feature writer on the Daily Mail before joining the Independent on Sunday, initially as football correspondent and later chief sports writer. He is currently a freelance writer, predominantly for the Sunday Times. He collaborated with Sir Steve Redgrave and Sir Ben Ainslie on their autobiographies. He is a long-time confidant of Barney Curley and assisted him with his acclaimed life story Giving A Little Back. He lives with his wife Louise in Oxfordshire.

GOR006069562
The Sure Thing: The Greatest Coup in Horse Racing History by Nick Townsend
Nick Townsend
Used - Very Good
Paperback
Cornerstone
2014-02-27
416
1780891962
9781780891965
N/A
Book picture is for illustrative purposes only, actual binding, cover or edition may vary.
This is a used book - there is no escaping the fact it has been read by someone else and it will show signs of wear and previous use. Overall we expect it to be in very good condition, but if you are not entirely satisfied please get in touch with us.