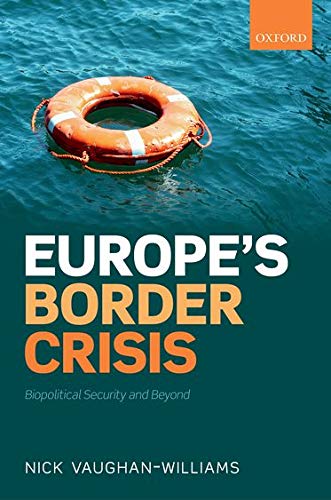 Europe's Border Crisis investigates dynamics in EU border security and migration management and advances a path-breaking framework for thought, judgment, and action in this context. It argues that a crisis point has emerged whereby irregular migrants are treated as both a security threat to the EU and as a life that is threatened and in need of saving. This leads to paradoxical situations such that humanitarian policies and practices often expose irregular migrants to dehumanizing and lethal border security mechanisms. The dominant way of understanding these dynamics, one that blames a gap between policy and practice, fails to address the deeper political issues at stake and ends up perpetuating the terms of the crisis. Drawing on conceptual resources in biopolitical theory, particularly the work of Roberto Esposito, the book offers an alternative diagnosis of the problem in order to move beyond the present impasse. It argues that both negative and positive dimensions of EU border security are symptomatic of tensions within biopolitical techniques of government. While bordering practices are designed to play a defensive role they contain the potential for excessive security mechanisms that threaten the very values and lives they purport to protect. Each chapter draws on a different biopolitical key to both interrogate diverse technologies of power at a range of border sites and explore the insights and limits of the biopolitical paradigm. Must border security always result in dehumanization and death? Is a more affirmative approach to border politics possible? Europe's Border Crisis sets out a new horizon for addressing these and related questions.

Europe's Border Crisis is a work of great interest, which integrates socio-political and philosophical analysis. Drawing on biopolitical paradigms in contemporary political philosophy, it finds keys for interpreting current dynamics within immigration policies and their antinomic consequences. It is a useful and original book that progresses research in this field of study. * Roberto Esposito, Scuola Normale Superiore, Pisa *
Since the second half of 2015, Europe's focus has been on closing the borders, striking a deal with Turkey to take back refugees from Greece, and shutting down the Balkan route that many thousands took to Northern Europe beforehand. Is there any way to understand these developments, beyond emotional judgements such as callous and deadly or harsh but necessary? Vaughan-Williams, whose book is aimed at broadening the scope of academic research on borders and migration, argues for a new way of seeing the problem. * Daniel Trilling, Times Literary Supplement *
Europe's Border Crisis is a dense, provocative and timely reflection on the debate on border security and migration management in Europe and beyond. The remarkable and innovative work of Nick Vaughan-Williams constitutes a step forward in migration and border studies. * Julien Brachet, Antipode: A Radical Journal of Geography *
Europe's Border Crisis is essential reading for students of political theory and International Relations. Nick Vaughan-Williams skillfully combines a sophisticated interpretation of the main paradigms of biopolitics with a rich empirical analysis of EU border security policies in a powerful critique of the very foundations of contemporary European politics. He also articulates an affirmative politics of the border, in which the encounter between self and other does not take the exclusionary and violent forms that we observe all around us today. * Sergei Prozorov, University of Helsinki *
Nick Vaughan-Williams' book offers an intellectually stimulating and conceptually challenging and rich discussion of what he terms 'Europe's border crisis.' In view of tragic deaths and human suffering at European/ EU external borders, this book makes a timely intervention in academic and non-academic debates on the controversial politics and paradoxical effects of EU border and migration policies and practices at diverse scales and spaces. * Beste Isleyen, University of Amsterdam *

Nick Vaughan-Williams is Professor of International Security and Head of the Department of Politics and International Studies at the University of Warwick, UK. From 2016 to 2019 he holds the Philip Leverhulme Prize for outstanding research in Politics and International Relations. His programme of research, supported with grants from the British Academy, UK Economic and Social Research Council, and Leverhulme Trust, focuses on the relationship between sovereignty, subjectivity, and the spatial dimensions of security particularly the changing nature of borders and bordering practices in global politics. His book Border Politics: The Limits of Sovereign Power (2009, 2012) was Gold Winner of the Association for Borderlands Studies Book Award. He is co-author of Critical Security Studies: An Introduction (2010, 2014) and Everyday Security Threats: Perceptions, Experiences, Consequences (2016).