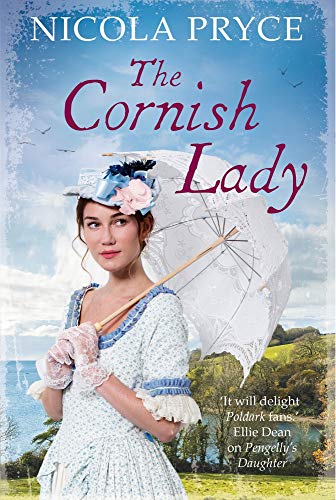 The Cornish Lady
by Nicola Pryce

The Cornish Lady by Nicola Pryce

The fourth novel in a stunning series set in eighteenth-century Cornwall, perfect for fans of Poldark.

Educated, beautiful and the daughter of a prosperous merchant, Angelica Lilly has been invited to spend the summer in high society. Her father's wealth is opening doors, and attracting marriage proposals, but Angelica still feels like an imposter among the aristocrats of Cornwall.

When her brother returns home, ill and under the influence of a dangerous man, Angelica's loyalties are tested to the limit. Her one hope lies with coachman Henry Trevelyan, a softly spoken, educated man with kind eyes. But when Henry seemingly betrays Angelica, she has no one to turn to. Who is Henry, and what does he want? And can Angelica save her brother from a terrible plot that threatens to ruin her entire family?

A most enjoyable read set in the wild and majestic landscape of Cornwall. It will delight Poldark fans. * Ellie Dean, Bestselling Author of 'Keep Smiling Through' and 'Where the Heart Lies' on Pengelly's Daughter' *

Nicola Pryce trained as a nurse at St Bartholomew's Hospital in London. She has always loved literature and completed an Open University degree in Humanities. She is a qualified adult literacy support volunteer and lives with her husband in the Blackdown Hills in Somerset. Together they sail the south coast of Cornwall in search of adventure.

GOR009771370
The Cornish Lady by Nicola Pryce
Nicola Pryce
Cornish Saga
Used - Like New
Paperback
Atlantic Books
2019-03-07
464
1786493853
9781786493859
N/A
Book picture is for illustrative purposes only, actual binding, cover or edition may vary.
The book has been read, but looks new. The book cover has no visible wear, and the dust jacket is included if applicable. No missing or damaged pages, no tears, possible very minimal creasing, no underlining or highlighting of text, and no writing in the margins.