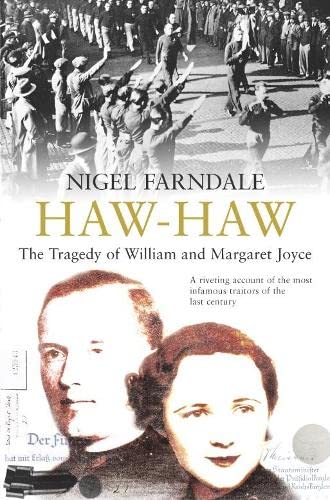 In Stock
$12.99
+10% GST
A riveting account of the most infamous traitors of the last century
Very Good Good Well Read
Only 4 left

Haw-Haw: The Tragedy of William and Margaret Joyce by Nigel Farndale

William and Margaret Joyce - Lord and Lady Haw-Haw - became one of the most mythologized, feared and ridiculed partnerships of the Second World War. His `Germany Calling' broadcasts and her pro-Nazi wireless talks were part of the very fabric of the Home Front. Yet, when the couple were captured in May 1945, only William was charged with high treason - despite its becoming apparent that he wasn't actually a British subject.

Authorized by William Joyce's daughter, Heather, and based on new interviews and unpublished letters, diaries and recently declassified Secret Service files, Haw-Haw is a meticulously researched biography: an incisive and shocking study of two people whose beliefs overrode everything.

Nigel Farndale is a columnist and feature writer for the Sunday Telegraph and has won a British Press Award for his interviews. He lives in London. This is his fourth book.

GOR001427116
Haw-Haw: The Tragedy of William and Margaret Joyce by Nigel Farndale
Nigel Farndale
Used - Very Good
Paperback
Pan Macmillan
2006-03-03
384
0330492845
9780330492843
Short-listed for Whitbread Book Awards: Biography Category 2005
Book picture is for illustrative purposes only, actual binding, cover or edition may vary.
This is a used book - there is no escaping the fact it has been read by someone else and it will show signs of wear and previous use. Overall we expect it to be in very good condition, but if you are not entirely satisfied please get in touch with us.