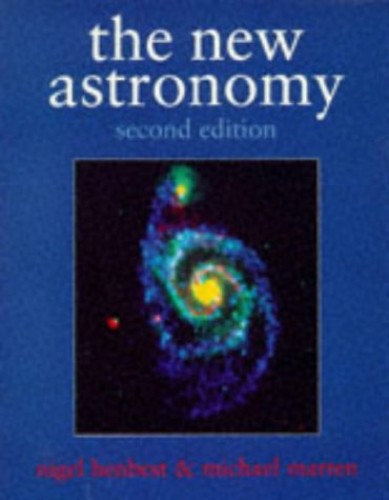 The New Astronomy
by Nigel Henbest

Used Price
$25.49
inc. GST
Free Shipping in Australia
The New Astronomy compares optical, infrared, ultraviolet, radio and X-ray astronomical observations. With over 300 colour photographs, including Halley's comet and Supernova 1987A, and details of the new techniques and discoveries, this is a brilliant synthesis of all that is new in the astronomy of today.
Reviews:
Trustpilot
Very Good

The New Astronomy by Nigel Henbest

The New Astronomy is a rich kaleidoscope of the finest images of planets, stars, galaxies and the universe. It presents a host of new information, gathered from right across the spectrum: spanning the colourful universe from X-rays, through ultraviolet, visible and infrared, and out to the radio waves. Nigel Henbest and Michael Marten take us on a journey in which we view the variety of the cosmos and its contents through every available window. The first edition of The New Astronomy created a sensation, as no accessible description of modern astronomy had attempted to assemble images from so wide a range. For the new edition there are almost 200 entirely new pictures, selected from the Hubble Space Telescope and orbiting X-ray detectors, as well as from very large telescopes based at Mauna Kea, Hawaii and in the Canary Islands. The new science includes intriguing images from gravitational lenses, which are natural telescopes created by black holes inside other galaxies, and a full description of the latest images of the background radiation of the universe. From the nearby planets to, quite literally, the edge of the observable universe, this book is a brilliant synthesis of all that is new in the astronomy of today. Each object described is displayed in a variety of wavelengths. The non-technical text explains the science behind the objects, and it has been substantially re-written for this second edition.

'The depth and detail of the text makes this book a fascinating read, a valuable reference source, and a useful guide to interpreting images in other books and periodicals. The new edition contains a wealth of information that was not available when the first was produced. Fascinating and beautifully produced, this book will be of great interest to anyone who wishes to keep in touch with, and make sense of, the frontiers of astronomical research.' Iain Nicholson, Astronomy Now
'Spectacular views of the universe are often used in education to capture the interest and imagination of students. This book is highly recommended both as a plentiful source of such images and as a neat summary of the methods used to obtain and interpret them ... As a visually stunning collection of images illustrating how combined new astronomy techniques can reveal the secrets of the universe, it works beautifully. A fascinating insight into modern astronomy.' C. V. Miles, GNOMON
'... moves beyond the merely visual to let us experience the awe-inspiring beauty of the radio, infrared, ultraviolet and X-ray skies. All these images are rendered in stunning false colour with details of the host of ground-based and space instrumentation that helped us to obtain this refreshingly new insight into the heavens.' Carole Stott, New Scientist
'The book contains some of the best illustrations from the largest ground-based telescopes and space-born instrumentation of today ... The New Astronomy will appeal to a very wide readership, and will particularly enrich the imagination of young students at all levels and readers in all walks of life.' Irish Astronomical Journal
'... the material has been extensively updated and there are complete new sections on Halley's comet, Super Nova 1987A, and the cosmic microwave background ... the authors are to be congratulated on producing a new edition that has the same high quality as the old one and definitely supersedes it ... the paperback is excellent value.' Robert Connon Smith, The Observatory
'The photographs are stunning, the cross referencing of the different wavelength observations revealing, and the depth and clarity of the explanations make this book about as good as it could be covering the subject at this breadth.' Alan Hamilton, OUGS Journal
'A sumptuous book with gorgeous colour.' New Scientist
'The New Astronomy ranks among the most comprehensive of modern astronomical picture albums.' Sky and Telescope
'The pictures look stunning ... a colourful storm.' Scientific American
"...a rich collection of the finest images of planets, stars, galaxies, and the universe...For this new edition, there are over 200 entirely new images, selected from the Hubble Space Telescope and orbiting X-ray detectors, as well as from the leading groundbased radio and infrared telescopes. Like the first edition, The New Astrnomy is a colorful photo book." The Strolling Astronomer

GOR001686350
The New Astronomy by Nigel Henbest
Nigel Henbest
Used - Very Good
Paperback
Cambridge University Press
1996-08-28
242
0521408717
9780521408714
N/A
Book picture is for illustrative purposes only, actual binding, cover or edition may vary.
The book has been read but remains in clean condition. All pages are intact and the cover is intact. Some minor wear to the spine.