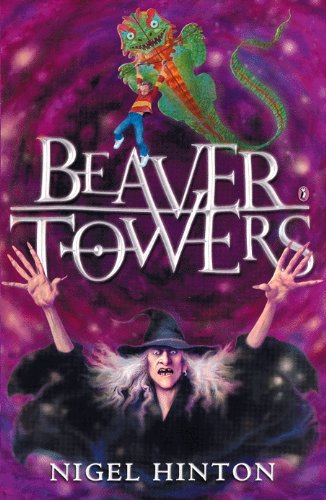 In Stock
$17.49
inc. GST
A magic spell whisks Philip away on his new kite to an island where he meets the beavers - Mr Edgar and his grandson, Baby B. They tell him of the danger that threatens them. The wicked witch Oyin has imprisoned most of the island's inhabitants in Beaver Towers, and when her powers are complete she will put them to death and rule the island.
Very Good Good Well Read
Only 4 left

The first adventure in the exciting, funny and magical BEAVER TOWERS series.

A magic spell whisks Philip away on his new kite to a far-off island where he meets the beavers - Mr Edgar and his grandson, Baby B. They tell him of the terrible danger that threatens them. The wicked witch Oyin has imprisoned most of the island's inhabitants in Beaver Towers, and when her powers are complete she will put them to death and rule the island. Philip has to get her spell book in order to save them.

Our children (and teachers) love the Beaver Towers series of books. The children become attached to the characters of Nick and Baby B and really do get taken off on an adventure with them. We often read the first book in the series to the class as a story time book and then so many children take it up and run with the series, devouring the other books! Many are inspired to even try and continue the series by writing the next one. * Rachael Herman, English Co-Ordinator, King Alfred's School, Golders Green *
I was introduced to Beaver Towers by my first Head Teacher at the very start of my teaching career. Reading it to my class of six and seven-year-olds, I found they were instantly captivated by the compelling characters (particularly Baby B) and the wonderfully tense chapter endings. Many families chose to buy the books to read along at home and I can think of countless pupils whose love of reading and fiction writing have been inspired by these wonderful books over the years. Now, as a Head Teacher myself, I recommend the Beaver Towers series to my new teachers - the books are brilliant and timeless. * Michael Bunting Head Teacher Recreation Road Infant School, Norwich *
Beaver Towers is an outstanding read! Every year, it's the one book that's guaranteed to capture every child's imagination, inspire them to read and bring their own writing alive. The children instantly connect with the brilliantly created characters, especially the lovable and hilarious Baby B. It's a joy to read aloud. I highly recommend it! * David Hemsley, Head Teacher, Hildenborough Primary School *
I've enjoyed reading Beaver Towers to classes of children for many years now. They absolutely love the stories and characters especially Baby B and can't wait to read the books themselves. Every time I finish a chapter there are groans from around the room. Even years later children return, fondly remembering the plots and characters. I can't recommend these books enough and will hopefully continue to read them for many years to come. * Sue Warren, Teacher, Brook House Junior School, Sheffield *

Nigel Hinton hated school and left to try several jobs before returning to education and training to be a teacher. He taught for nine years before, encouraged by the publication of his first book, COLLISION COURSE, he began to write full-time. The hugely successful BUDDY followed and then BUDDY'S SONG which was made into a film for which he wrote the screenplay and nine songs. THE FINDERS won the 1994 Children's Book Award for middle fiction. Nigel Hinton lives in Sussex.

GOR001307327
Beaver Towers by Nigel Hinton
Nigel Hinton
Used - Very Good
Paperback
Penguin Books Ltd
1995-07-27
112
0140370609
9780140370607
N/A
Book picture is for illustrative purposes only, actual binding, cover or edition may vary.
This is a used book - there is no escaping the fact it has been read by someone else and it will show signs of wear and previous use. Overall we expect it to be in very good condition, but if you are not entirely satisfied please get in touch with us.