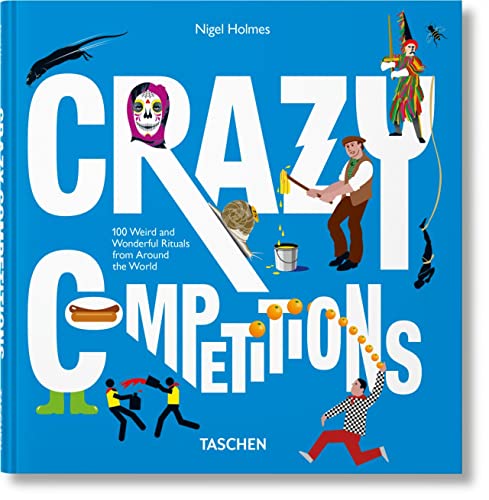 In Stock
$35.99
inc. GST
Ever heard of the Air Sex Championships in Austin, Texas? How about bog snorkeling in Llanwrtyd, Wales? No? Then brace yourself for Nigel Holmes's bewilderingly funny ride through the wildest, oddest, and most wonderful cultural events. From snail racing and baby crying to throwing just about anything, hilarious infographics reveal the lengths...
Very Good
Only 1 left

Whether it's flinging frozen rats or parading in holly evergreens, racing snails or carrying wives, human beings have long displayed their creativity in wild, odd, and sometimes just wonderful rituals and competitions. To show what lengths we'll go to uphold our eccentric customs, British American graphic designer Nigel Holmes channels his belief in the power of hilarity to bring together a bewilderingly funny tour around the globe in search of incredible events, all dryly explained with brilliant infographics.

You'll encounter the startling facts behind peat-bog snorkeling in Wales (wet suits recommended), hotdog-swallowing in the USA (tip: avoid breakfast), or who can make a baby cry quickest in Japan. Through this gallimaufry of gamesmanship and passion, an endearingly warm and affectionate portrait of human endeavor and good humor emerges as Holmes proves, page after page, that when it comes to feats of bravery, endurance, or sheer nonsense, the world is united as one in the fine and often hilarious way of celebrating culture.

Nigel Holmes is a British-American graphic designer who spent 16 years at Time magazine, eventually becoming its graphics director. A pioneer in the field of information graphics, his clients have included Apple, Sony, National Geographic, and The New York Times. He has authored and contributed to several books on the subject, and has taught at Stanford and presented at TED Conferences. He believes in the power of humor to help people understand stuff, and he always wears blue. Julius Wiedemann studied graphic design and marketing and was an art editor for newspapers and design magazines in Tokyo before joining TASCHEN in 2001. His titles include the Illustration Now! and Record Covers series, as well as the infographics collection and books about advertising and visual culture.

GOR009645404
Crazy Competitions by Nigel Holmes
Nigel Holmes
Used - Very Good
Hardback
Taschen GmbH
2018-04-20
216
383653908X
9783836539081
N/A
Book picture is for illustrative purposes only, actual binding, cover or edition may vary.
This is a used book - there is no escaping the fact it has been read by someone else and it will show signs of wear and previous use. Overall we expect it to be in very good condition, but if you are not entirely satisfied please get in touch with us.