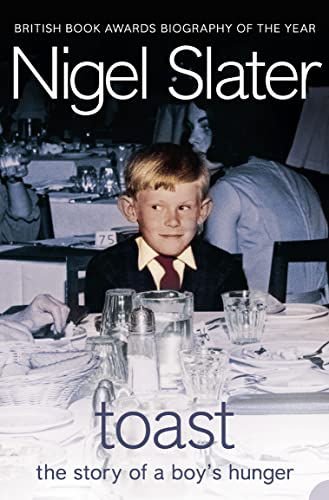 Toast: The Story of a Boy's Hunger by Nigel Slater

`My mother is scraping a piece of burned toast out of the kitchen window, a crease of annoyance across her forehead. This is not an occasional occurrence. My mother burns the toast as surely as the sun rises each morning.'

Toast is Nigel Slater's award-winning biography of a childhood remembered through food. Whether recalling his mother's surprisingly good rice pudding, his father's bold foray into spaghetti and his dreaded Boxing Day stew, or such culinary highlights as Arctic Roll and Grilled Grapefruit (then considered something of a status symbol in Wolverhampton), this remarkable memoir vividly recreates daily life in 1960s suburban England.

'Acutely observed, poignant and beautifully written...Slater tells his heartbreaking story with great subtlety. The theme of food and love is a fascinating one and I have never seen it better handled.' Daily Telegraph

'He recreates with moving honesty and laugh-out-loud comedy the hopes and fears of boyhood. Remarkable.' Observer

'A talent for prose as simple and pleasurable as his recipes.' Sunday Telegraph

'Exquisitely written...You read this remarkable memoir partly cringing, partly marvelling at Slater's hallucinogenic retrieval of times past. He is the Proust of the Nesquik era.' Independent

`This touching memoir proves [Slater] is more than a cookery writer. Its emotional impact will touch a chord with many.' Sunday Mirror

`It's bitter-sweet, it's a book to be consumed in a single sitting, a book that slips down really nicely. However you want to put it, "Toast" is delicious.' The Oldie

Nigel Slater is Britain's top food writer. His hugely popular columns and books have won him an enormous following for his direct, up-to-the-minute and delicious approach to food. He has written six books, has an award-winning column in the Observer and a regular column in Sainsbury's Magazine.

GOR000364793
Toast: The Story of a Boy's Hunger by Nigel Slater
Nigel Slater
Used - Very Good
Paperback
HarperCollins Publishers
2004-04-16
256
1841154717
9781841154718
N/A
Book picture is for illustrative purposes only, actual binding, cover or edition may vary.
This is a used book - there is no escaping the fact it has been read by someone else and it will show signs of wear and previous use. Overall we expect it to be in very good condition, but if you are not entirely satisfied please get in touch with us.