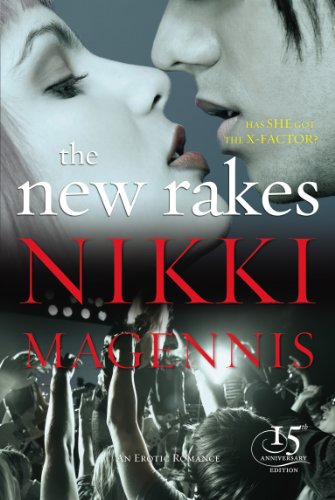 The New Rakes
by Nikki Magennis

The New Rakes are known for the hot, dirty electro music they play in basement gigs all over the city, but lead singer Kara has ambitions beyond underground success.

The New Rakes by Nikki Magennis

The New Rakes are known for the hot, dirty electro music they play in basement gigs all over the city, but lead singer Kara has ambitions beyond underground success. Fuelled by her sexy performances and the love/hate relationship with her guitarist Tam, the band is poised on the brink of stardom. And when Mike Greene, the charismatic head of a record company, offers The New Rakes a deal, it seems all their hopes are about to be realised.

But Kara and Mike have history - and this time he wants more than a professional relationship. Kara is seduced by his glamorous promises and despite the attempts of his manipulative ex-girlfriend, she becomes Mike's lover.

As she gets tangled in a web of sex, power and deceit, Kara learns the hard way what success really means. In the end, she may have to choose between the limelight and true love.

Nikki Magennis is a writer and artist who lives in Glasgow, Scotland. Her stories have appeared in numerous short story collections, including Sex in Public, Sex with Strangers, and Sex and Music . She is also the author of Circus Excite and The New Rakes, all available from Black Lace.

GOR010225102
The New Rakes by Nikki Magennis
Nikki Magennis
Used - Well Read
Paperback
Ebury Publishing
2008-11-06
256
0352345039
9780352345035
N/A
Book picture is for illustrative purposes only, actual binding, cover or edition may vary.
This is a used book. We do our best to provide good quality books for you to read, but there is no escaping the fact that it has been owned and read by someone else previously. Therefore it will show signs of wear and may be an ex library book.