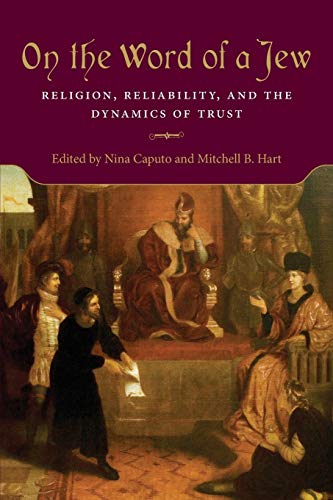 On the Word of a Jew by Nina Caputo

On the Word of a Jew: Religion, Reliability, and the Dynamics of Trust by Nina Caputo

What, if anything, does religion have to do with how reliable we perceive one another to be? When and how did religious difference matter in the past when it came to trusting the word of another? In today's world, we take for granted that being Jewish should not matter when it comes to acting or engaging in the public realm, but this was not always the case. The essays in this volume look at how and when Jews were recognized as reliable and trustworthy in the areas of jurisprudence, medicine, politics, academia, culture, business, and finance. As they explore issues of trust and mistrust, the authors reveal how caricatures of Jews move through religious, political, and legal systems. While the volume is framed as an exploration of Jewish and Christian relations, it grapples with perceptions of Jews and Jewishness from the biblical period to today, from the Middle East to North America, and in Ashkenazi and Sephardi traditions. Taken together these essays reflect on the mechanics of trust, and sometimes mistrust, in everyday interactions involving Jews.

"The book is scrupulously documented allowing the reader to follow up with further information on any given aspect of this topic. Highly recommended for all adult and secondary school Judaica collections"

Nina Caputo is Associate Professor in the Department of History at the University of Florida. She is author of Nahmanides in Medieval Catalonia: History, Community, Messianism and Debating Truth: The Barcelona Disputation of 1263, a Graphic History and editor (with Andrea Sterk) of Faithful Narratives: The Challenge of Religion in History.

Joshua Curk received his doctorate from the University of Oxford in 2015. He teaches high school history in Toronto.

Stefanie Fischer is a post-doctoral research fellow at Potsdam University. She is author of OEkonomisches Vertrauen und antisemitische Gewalt: Jdische Viehhandler in Mittelfranken.

Shaina Hammerman is the author of Silver Screen, Hasidic Jews: The Story of an Image. She teaches Jewish studies, cultural history, and literature at the University of San Francisco and San Quentin State Prison.

Mitchell B. Hart is Professor of History and the Alexander Grass Chair in Jewish History at the University of Florida. He is editor (with Tony Michels) of The Cambridge History of Modern Judaism, volume 8: The Modern Period, 1815-2000.

Robert S. Kawashima holds a joint appointment in the Department of Religion and the Center for Jewish Studies at the University of Florida. He is author of Biblical Narrative and the Death of the Rhapsode.

Lisa Leff is Professor of History at American University. Her research focuses on the Jews of modern France. She is author of The Archive Thief.

Robert Leventhal is Associate Professor of German Studies in the Department of Modern Languages at the College of William and Mary. He is author of The Disciplines of Interpretation and editor of the volume Reading after Foucault.

Mitch Numark is Associate Professor in the Department of History at Sacramento State in California.

Derek J. Penslar is the Samuel J. Zacks Professor of European Jewish History at the University of Toronto and a Visiting Professor of History at Harvard. He co-edits The Journal of Israeli History and he is a Fellow of the Royal Society of Canada and of the American Academy of Jewish Research.

Ephraim Shoham-Steiner teaches Medieval Jewish History at Ben-Gurion University of the Negev. His is author of On the Margins of a Minority: Leprosy, Madness, and Disability among the Jews of Medieval Europe.

Joshua Teplitsky is Assistant Professor in the Department of History at Stony Brook.

Introduction: On the Word of a Jew, or Trusting Jewish History / Nina Caputo and Mitchell B. Hart

Section One: To Swear an Oath

1. Oaths, Vows, and Trust in the Bible / Robert S. Kawashima

2. "And in most of their business transactions they rely on this": Some Reflections on Jews and Oaths in the Commercial Arena in Medieval Europe / Ephraim Shoham-Steiner

3. The Oath of a Jew in the Thirteenth Century English Legal Context / Joshua Curk

4. What is an Infidel?: Jewish Oaths and Jewish History in the Making of English Trust and Tolerance / Mitchell B. Hart

Section Two: The Business of Trust

7. Jewish Peddlers and Non-Jewish Customers in the New World: Between Profit and Trust / Hasia Diner

8. Belonging and Trustworthiness: Jewish Businessmen in the Public Rhetoric around the "Trustworthy Businessman" in Post-World War I Germany / Stefanie Fischer

9. The Voice of a Jew? Petrus Alfonsi's Dialogi contra judaeos and the Question of True Conversion / Nina Caputo

10. A Return to Credibility? The Rehabilitation of Repentant Apostates in Medieval Ashkenaz / Rachel Furst

11. The Jewish Physician as Respondent, Confidant, and Proxy: The Case of Marcus Herz and Immanuel Kant / Robert Leventhal

Section Four: The Politics of Trust

12. Perspectives from the Periphery: The East India Company's Jewish Sepoys, Anglo-Jewry, and the Image of "the Jew" / Mitch Numark

NLS9780253037404
9780253037404
0253037409
On the Word of a Jew: Religion, Reliability, and the Dynamics of Trust by Nina Caputo
Nina Caputo
New
Paperback
Indiana University Press
2019-01-14
336
N/A
Book picture is for illustrative purposes only, actual binding, cover or edition may vary.
This is a new book - be the first to read this copy. With untouched pages and a perfect binding, your brand new copy is ready to be opened for the first time
Trustpilot