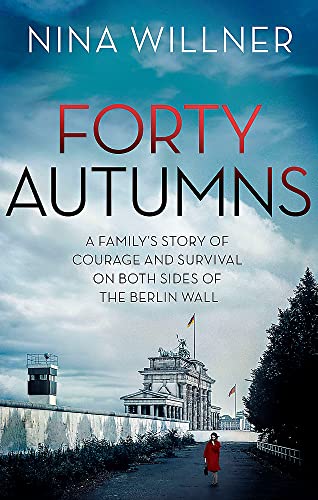 In Stock
$17.49
inc. GST
An incredible memoir about a family divided by the Berlin Wall that will appeal to readers of Stasiland and fans of The Lives of Others.
Very Good
Only 3 left

Forty Autumns: A family's story of courage and survival on both sides of the Berlin Wall by Nina Willner

In Forty Autumns, Nina Willner recounts the history of three generations of her family - mothers, sisters, daughters and cousins - separated by forty years of Soviet rule, and reunited after the fall of the Berlin Wall.

Shortly after the end of the Second World War, as the Soviets took control of the eastern part of Germany, Hanna, a schoolteacher's daughter, escaped with nothing more than a small suitcase and the clothes on her back. As Hanna built a new life in the West, her relatives (her mother, father and eight siblings) remained in the East. The construction of the Berlin Wall severed all hope of any future reunion.
Hanna fell in love and moved to America. She made many attempts to establish contact with her family, but most were unsuccessful. Her father was under close observation; her mother, younger sister Heidi and the others struggled to adjust to life under a bizarre and brutal regime that kept its citizens cut off from the outside world.
A few years later, Hanna had a daughter - Nina - who grew up to become the first female US Army intelligence officer to lead sensitive intelligence collection operations in East Berlin at the height of the Cold War. At the same time, Heidi's daughter, Cordula, was training to become a member of the East German Olympic cycling team. Though separated by only a few miles, Nina and her relatives led entirely different lives.
Once the Berlin Wall came down, and the families were reunited, Nina Willner discovered an extraordinary story. In Forty Autumns she vividly brings to life many accounts of courage and survival, set against the backdrop of four decades that divided a nation and the world.

Willner's epic memoir traverses three generations of mothers, recounting the tragedy, estrangement, and overwhelming courage of a family torn apart by the ideological division of Germany during the Cold War. Willner, a former U.S. Army intelligence officer, weaves familial legends of escape from farmsteads guarded by roving East German border patrols, with tales of international espionage at the 1958 World's Fair. Her interrogative and unabashed voice explores the painful intersection of national duty and familial responsibilities . . . Willner's depiction of the brutal East German regime and the fight of one family to unite is a thrilling and relevant read for historians and casual readers alike. * Publishers Weekly *
Thoughtful and informative, Willner's book not only offers a personal view of the traumatic effects of German partition. It also celebrates the enduring resilience of the human spirit. A poignant and engrossing, occasionally harrowing, family memoir. * Kirkus Review *
A fascinating and very readable book, suffused with family affection * Oldie *
Willner writes about events that happened on another continent before she was born with such vividness and immediacy that she could almost have been there herself. This account of the collective sorrow of a family rent asunder, relating their experiences in the context of the Cold War, gives a human face to the millions for whom the Berlin Wall divided not just a city but their hearts * The Herald *

Nina Willner is a former US Army intelligence officer who served in Berlin during the Cold War. Following a career in intelligence, Nina worked in Moscow, Minsk and Prague promoting human rights, children's causes and the rule of law for the US Government, non-profit organizations and a variety of charities. She currently lives in Istanbul, Turkey. Forty Autumns is her first book.

GOR009279745
Forty Autumns: A family's story of courage and survival on both sides of the Berlin Wall by Nina Willner
Nina Willner
Used - Very Good
Paperback
Little, Brown Book Group
2018-01-18
416
0349141363
9780349141367
N/A
Book picture is for illustrative purposes only, actual binding, cover or edition may vary.
This is a used book - there is no escaping the fact it has been read by someone else and it will show signs of wear and previous use. Overall we expect it to be in very good condition, but if you are not entirely satisfied please get in touch with us.