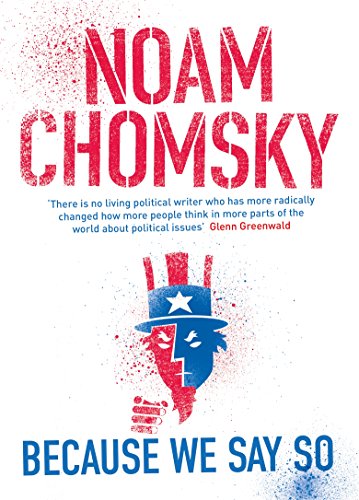 Because We Say So
by Noam Chomsky

Because We Say So Summary

Because We Say So by Noam Chomsky

In 1962, the eminent statesman Dean Acheson enunciated a principle that has dominated global politics ever since: that no legal issue arises when the United States responds to a challenge to its 'power, position, and prestige'. In short, whatever the world may think, US actions are legitimate because they say so.

Spanning the impact of Edward Snowden's whistleblowing and Palestinian-Israeli relations to deeper reflections on political philosophy and the importance of a commons to democracy, Because We Say So takes American imperialism head on.

Because We Say So Reviews

Publisher's description. From Edward Snowden and Palestinian-Israeli relations to political philosophy and the nature of democracy, Because We Say So offers a cross-section of perspectives on the question of America's ongoing hegemony. * Penguin *
The world's greatest public intellectual * Observer *

Noam Chomsky is the bestselling author of over 100 influential political books, including Hegemony or Survival, Imperial Ambitions, Failed States, Interventions, What We Say Goes, Hopes and Prospects, Making the Future, On Anarchism, Masters of Mankind and Who Rules the World. He has also been the subject of numerous books of biography and interviews and has collaborated with journalists on books such as Perilous Power, Gaza in Crisis, and On Palestine.

GOR009705945
Because We Say So by Noam Chomsky
Noam Chomsky
Used - Very Good
Paperback
Penguin Books Ltd
2015-08-27
208
0241188369
9780241188361
N/A
Book picture is for illustrative purposes only, actual binding, cover or edition may vary.
This is a used book - there is no escaping the fact it has been read by someone else and it will show signs of wear and previous use. Overall we expect it to be in very good condition, but if you are not entirely satisfied please get in touch with us.