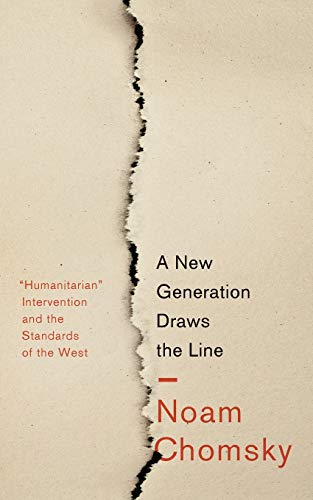 A New Generation Draws the Line
by Noam Chomsky

Out of Stock
$44.99
inc. GST
Deftly exposes the hypocrisy and double-speak of those who use 'humanitarian intervention' as a cover for imperial policies.
Very Good
Only 0 left

A New Generation Draws the Line: 'Humanitarian' Intervention and the Standards of the West by Noam Chomsky

How do we understand the ethics of humanitarian intervention in today's world? After Western intervention in Libya's civil war this new edition of A New Generation Draws the Line provides timely answers.

In a new chapter on recent interventions Chomsky dissects the meaning of the 'right to protect' principle. Other chapters examine the West's uses and abuses of 'humanitarian intervention' including detailed studies of East Timor and Kosovo.

The actions of Muammar Gaddafi and the trial of Serbian military commander Ratko Mladic have energised narratives about the role of the 'civilised' West. In this book, Chomsky deploys his forensic method - asking the difficult questions the West would prefer to avoid.

'Judged in terms of the power, range, novelty, and influence of his thought, Noam Chomsky is arguably the most important intellectual alive' -- The New York Times
'On the one hand we have the established media, the respectable community of foreign affairs analysts, the government - on the other, Noam Chomsky' -- The Nation
'For Chomsky, the 'official doctrine' of military intervention to safeguard human rights is as much a sham as the 'New World Order' trumpeted during the Gulf War' -- Guardian

Noam Chomsky is one of the most cited scholars in history and has profoundly shaped contemporary understanding of American politics. An ally of anarcho-syndicalists the world over, he has authored numerous books on linguistics, history and politics. He is Institute Professor (emeritus) in the Department of Linguistics and Philosophy at MIT, and Laureate Professor of Linguistics and Agnese Nelms Haury Chair in the Program in Environment and Social Justice at the University of Arizona.

GOR005602513
A New Generation Draws the Line: 'Humanitarian' Intervention and the Standards of the West by Noam Chomsky
Noam Chomsky
Used - Very Good
Paperback
Pluto Press
2011-11-16
200
074533234X
9780745332345
N/A
Book picture is for illustrative purposes only, actual binding, cover or edition may vary.
This is a used book - there is no escaping the fact it has been read by someone else and it will show signs of wear and previous use. Overall we expect it to be in very good condition, but if you are not entirely satisfied please get in touch with us.