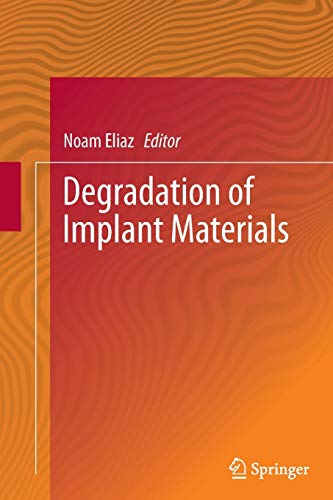 This book reviews the current understanding of the mechanical, chemical and biological processes that are responsible for the degradation of a variety of implant materials. All 18 chapters will be written by internationally renowned experts to address both fundamental and practical aspects of research into the field. Different failure mechanisms such as corrosion, fatigue, and wear will be reviewed, together with experimental techniques for monitoring them, either in vitro or in vivo. Procedures for implant retrieval and analysis will be presented. A variety of biomaterials (stainless steels, titanium and its alloys, nitinol, magnesium alloys, polyethylene, biodegradable polymers, silicone gel, hydrogels, calcium phosphates) and medical devices (orthopedic and dental implants, stents, heart valves, breast implants) will be analyzed in detail. The book will serve as a broad reference source for graduate students and researchers studying biomedicine, corrosion, surface science, and electrochemistry.

Prof. Eliaz has skillfully edited a volume of medical importance containing chapters by various experts on degradation of implants. The book will be of major interest to engineers and to surgeons planning implantation.

Noam Eliaz is an Associate Professor at Tel-Aviv University, Israel, where he serves as the Head of The Biomaterials and Corrosion Laboratory. He also serves as a Chief Editor of the journal Corrosion Reviews (jointly with Ron Latanision). He received his B.Sc. and Ph.D. (direct track) in Materials Engineering, both cum laude, from Ben-Gurion University. Next, he became the first ever materials scientist to receive, simultaneously, a Fulbright postdoctoral award and a Rothschild postdoctoral fellowship and worked for two years in the H.H. Uhlig Corrosion Laboratory at M.I.T. To-date, he has contributed more than 230 journal and conference publications, including 31 plenary and invited talks, as well as 5 book chapters. In addition to editing this Degradation of Implant Materials book, he has edited a double volume entitled Applications of Electrochemistry and Nanotechnology in Biology and Medicine for the reputed book series Modern Aspects of Electrochemistry (Springer). He has garnered numerous accolades, including the T.P. Hoar Award for the best paper published in Corrosion Science during 2001 (on corrosion of Ti-Ag-based alloys processed by three-dimensional printing for biomedical applications), and NACE International's Herbert H. Uhlig Award (2010) and Fellow Award (2012). His main research interests include environment-induced degradation of materials, failure analysis, Bio-Ferrography, biomaterials (with focus on electrocrystallization of hydroxyapatite and other calcium phosphates), and electrochemical processing (namely, electrodeposition, electroless deposition and electropolishing) of materials.

NLS9781489985699
9781489985699
1489985697
Degradation of Implant Materials by Noam Eliaz
Noam Eliaz
New
Paperback
Springer-Verlag New York Inc.
2014-09-19
516
N/A
Book picture is for illustrative purposes only, actual binding, cover or edition may vary.
This is a new book - be the first to read this copy. With untouched pages and a perfect binding, your brand new copy is ready to be opened for the first time
Trustpilot