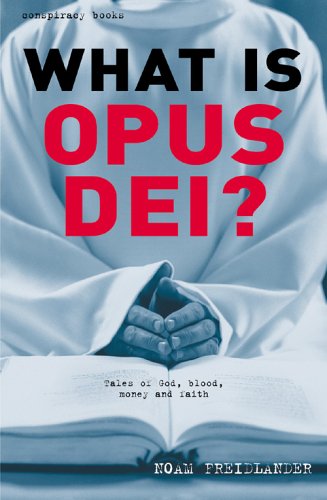 What is Opus Dei?
by Noam Freidlander

Used Price
$13.69
inc. GST
Free Shipping in Australia
Following publication of 'The Da Vinci Code', the 2002 novel by Dan Brown, a worldwide audience is now aware of the existence of the mysterious cult of Opus Dei. However, very little is actually known about this secret Catholic organisation.
Reviews:
Trustpilot
Very Good

What is Opus Dei? Summary

What is Opus Dei?: Tales of God, Blood, Money and Faith by Noam Freidlander

Following the publication of `The Da Vinci Code', a worldwide audience is now aware of the existence of the mysterious cult of Opus Dei. However, very little is actually known about this secret Catholic organisation. The book investigates the conspiracy theories behind the movement from its inception in 1928 to the present day. It includes Opus Dei's activities in Spain where the movement's founder, Escriva, allied his group with Franco's regime - leading to several Opus Dei members occupying key positions in his government - and in Nazi Germany where in 1945, many leading Nazis escaped through the Knights Of Malta and the Vatican `rat run' to the Americas.

It goes on to explore Opus Dei's political involvement in several South American countries such as with Augusto Pinochet's Chilean Junta and its links with the Vatican - John Paul II gave the movement a unique status in the church making it a `personal prelature' strengthening its area of influence in the appointment of a future Pope. In America, close links were forged between Opus Dei and the CIA - both of which were founded around the same time. Ronald Reagan's appointment of several high profile Opus Dei members is discussed, as is the arrest of double agent Robert Hanson in the 1980s and the Waco Siege.

Spreading the net wider still, Wilkins also examines Opus Dei's influence across the former Eastern Bloc in countries like Hungary, Czech Republic, Lithuania, Estonia, Poland and Kazakhstan and concludes with a look at the present day state of Opus Dei and how it is still working behind the scenes in many governments today...

Customer Reviews - What is Opus Dei?

Alex Wilkins is a pseudonym used by one of Britain's leading writers on religious affairs. The author took a masters degree in theology and ecclesiastical history at a prestigious British university and regularly contributes articles to national newspapers on religious subjects.

GOR002757032
What is Opus Dei?: Tales of God, Blood, Money and Faith by Noam Freidlander
Noam Freidlander
The Conspiracy Series
Used - Very Good
Paperback
Pavilion Books
2005-07-20
256
1843402882
9781843402886
N/A
Book picture is for illustrative purposes only, actual binding, cover or edition may vary.
This is a used book - there is no escaping the fact it has been read by someone else and it will show signs of wear and previous use. Overall we expect it to be in very good condition, but if you are not entirely satisfied please get in touch with us.