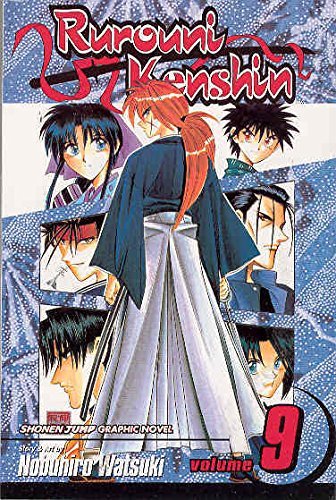 Used Price
$15.99
inc. GST
Free Shipping in Australia
The battle to decide the fate of Meiji-era swordsmanship has begun!
Reviews:
Trustpilot
Like New

The battle to decide the fate of Meiji-era swordsmanship has begun!

Action, romance, and historical intrigue help make Nobuhiro Watsuki's Rurouni Kenshin, the tale of a wandering swordsman set against the backdrop of the Meiji Restoration, one of the most popular Shonen Jump titles among fans to date. Himura Kenshin, once an assassin (or hitokiri ) of ferocious power, now fights to protect the honor of those in need.

A glimpse of the new Japan if the mad ambitions of Shishio Makoto should succeed is revealed when Kenshin arrives in Kyoto and meets him at last...although the epic battle between them will have to wait. Pitted against Shishio's soldiers, Kenshin's reversed-edge sakabato is broken--can it be reforged? Should it be reforged? For time has once again begun to flow, and violence once more washes over the land. Although Kenshin has abandoned the ways of the hitokiri and has sworn to take life no longer, a new assassin has now arisen--one whose taste for blood and thirst for power knows no bounds...

Rurouni Kenshin, which has found fans not only in Japan but around the world, first made its appearance in 1992 as an original short story in Weekly Shonen Jump Special. Later rewritten and published as a regular, continuing Jump series in 1994, Rurouni Kenshin ended serialization in 1999 but continued in popularity, as evidenced by the 2000 publication of Yahiko no Sakabato (Yahiko's Reversed-Edge Sword) and the 2015 publication of Rurouni Kenshin: Restoration in Weekly Shonen Jump. The series has also inspired novels, anime and films. Watsuki is also the author of the popular series Buso Renkin, published by VIZ Media.

GOR011101913
Rurouni Kenshin, Vol. 9 by Nobuhiro Watsuki
Nobuhiro Watsuki
Rurouni Kenshin
Used - Like New
Paperback
Viz Media, Subs. of Shogakukan Inc
2008-10-06
192
1591166691
9781591166696
N/A
Book picture is for illustrative purposes only, actual binding, cover or edition may vary.
The book has been read, but looks new. The book cover has no visible wear, and the dust jacket is included if applicable. No missing or damaged pages, no tears, possible very minimal creasing, no underlining or highlighting of text, and no writing in the margins.