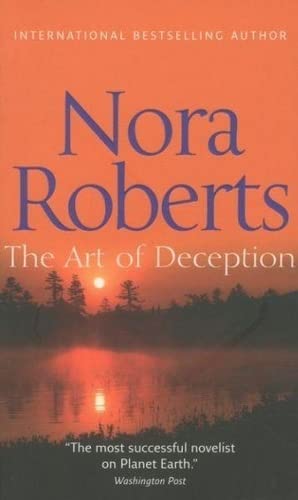 The Art Of Deception
by Nora Roberts

As far as I know, no one's tried to kill me before.

The Art Of Deception Summary

The Art Of Deception by Nora Roberts

As far as I know, no one's tried to kill me before.

In reality, he's been sent to investigate the whereabouts of a stolen painting. Phillip is involved with the forgery and sale of famous works, and is currently planning the sale of the Rembrandt which Adam is seeking. Phillip's crimes may be harmless, but it quickly becomes apparent that someone else is not. An attempt is made on the life of Kirby, Phillip's daughter. And what had been an exciting game becomes dangerously real...

`A storyteller of immeasurable diversity and talent'
Publisher's Weekly

`You can't bottle wish fulfilment, but Nora Roberts certainly knows how to put it on the page.' New York Times

Customer Reviews - The Art Of Deception

The Art Of Deception Reviews

"The most successful novelist on Planet Earth." - Washington Post "Roberts's bestselling novels are some of the best in the romance genre.'" - USA TODAY "Nora Roberts is a storyteller of immeasurable diversity and talent." - Publishers Weekly "Romance will never die as long as the mega-selling Roberts keeps writing it." - Kirkus Reviews"

GOR001961939
The Art Of Deception by Nora Roberts
Nora Roberts
Used - Very Good
Paperback
HarperCollins Publishers
2010-08-06
300
0263876772
9780263876772
N/A
Book picture is for illustrative purposes only, actual binding, cover or edition may vary.
This is a used book - there is no escaping the fact it has been read by someone else and it will show signs of wear and previous use. Overall we expect it to be in very good condition, but if you are not entirely satisfied please get in touch with us.