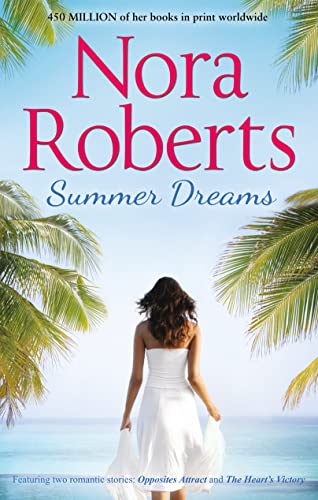 Ty Starbuck and Asher Wolfe were the tennis world's premier couple, until their passion nearly destroyed them both. Now, three years later, Asher is back on the circuit,

Ty Starbuck and Asher Wolfe were the tennis world's premier couple, until their passion nearly destroyed them both. Now, three years later, Asher is back on the circuit,

determined to win. But even with all her icy control in place she cannot resist Ty...

Cynthia Fox once had a crush on racing car driver Lance Matthews, but now, a professional photographer, Foxy is long-recovered from her teenage love. Then she is assigned to cover the racing season and comes face to face with the man who once rejected her. This time, however, the roles have been reversed and Lance is chasing her!

GOR010854994
Summer Dreams: Opposites Attract / The Heart's Victory by Nora Roberts
Nora Roberts
Used - Like New
Paperback
HarperCollins Publishers
2014-05-16
496
0263246418
9780263246414
N/A
Book picture is for illustrative purposes only, actual binding, cover or edition may vary.
The book has been read, but looks new. The book cover has no visible wear, and the dust jacket is included if applicable. No missing or damaged pages, no tears, possible very minimal creasing, no underlining or highlighting of text, and no writing in the margins.