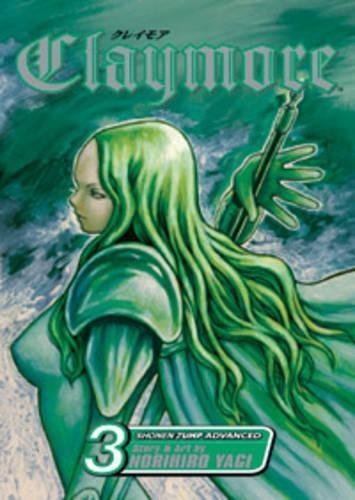 A Claymore - a female warrior named for the sword she carries - travels from medieval village to village to destroy Yoma, monsters who disguise themselves as humans and who are almost impossible to kill. Claymores are half-humans, half-demons who willingly transformed themselves by mixing their blood with monster's blood. Claire, nicknamed silver-eyed killer, is such a powerful Claymore, she can slay a Yoma using only one hand. But she must constantly struggle to keep from becoming a monster herself.

Clare's first battle with the Yoma of Rabona has left her body drained and shattered. With no time to recover, she must face the creature again after it chooses Raki as its next victim. Luckily, Raki remembers that he is carrying Clare's trusted broadsword and manages to get it into her hands. But unlike Clare, the Yoma is fighting at full strength and thirsting for blood...

- Born in Okinawa, 1968. Blood type A. Male.
- Won the 32nd Akatsuka Award with his debut work "UNDEADMAN"
- "UNDEADMAN" and its 2 sequels appeared in Monthly Shonen Jump
Magazine, gaining readers' popularity
- His first serialization was "Angel Densetsu (Angel Legend)", a popular
comedy series which ran in Monthly Shonen Jump from 1992-2000.
- The serialization of "Claymore" began in 2001. In contrast to his
previous work (Angel Legend), "Claymore" is a grand epic saga.
- Things he likes (he said those are not his hobbies):
Comedians (like Downtown), martial art, games, driving, and hardrock for
music.

GOR002747193
Claymore, Vol. 3 by Norihiro Yagi
Norihiro Yagi
Claymore
Used - Very Good
Paperback
Viz Media, Subs. of Shogakukan Inc
2006-08-01
208
1421506203
9781421506203
N/A
Book picture is for illustrative purposes only, actual binding, cover or edition may vary.
This is a used book - there is no escaping the fact it has been read by someone else and it will show signs of wear and previous use. Overall we expect it to be in very good condition, but if you are not entirely satisfied please get in touch with us.