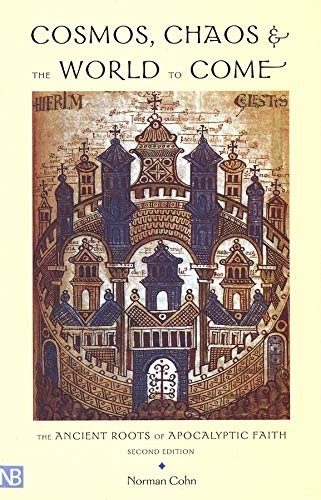 Cosmos, Chaos and the World to Come
by Norman Cohn

Out of Stock
$29.99
+10% GST
The view that good will overcome evil and lead to a perfect world is held by many religions and races. This work investigates the origins of this belief through the world views of Egypt, Mesopotamia and India, through Iranian and Jewish prophets, to early Christian beliefs.
Very Good
Only 0 left

Cosmos, Chaos and the World to Come Summary

Cosmos, Chaos and the World to Come: The Ancient Roots of Apocalyptic Faith; Second Edition by Norman Cohn

All over the world people look forward to a perfect future, when the forces of good will be finally victorious over the forces of evil. Once this was a radically new way of imagining the destiny of the world and of mankind. How did it originate, and what kind of world-view preceded it? In this engrossing book, the author of the classic work The Pursuit of the Millennium takes us on a journey of exploration, through the world-views of ancient Egypt, Mesopotamia, and India, through the innovations of Iranian and Jewish prophets and sages, to the earliest Christian imaginings of heaven on earth.

Until around 1500 B.C., it was generally believed that once the world had been set in order by the gods, it was in essence immutable. However, it was always a troubled world. By means of flood and drought, famine and plague, defeat in war, and death itself, demonic forces threatened and impaired it. Various combat myths told how a divine warrior kept the forces of chaos at bay and enabled the world to survive. Sometime between 1500 and 1200 B.C., the Iranian prophet Zoroaster broke from that static yet anxious world-view, reinterpreting the Iranian version of the combat myth. For Zoroaster, the world was moving, through incessant conflict, toward a conflictless state-"cosmos without chaos." The time would come when, in a prodigious battle, the supreme god would utterly defeat the forces of chaos and their human allies and eliminate them forever, and so bring an absolutely good world into being. Cohn reveals how this vision of the future was taken over by certain Jewish groups, notably the Jesus sect, with incalculable consequences.

Deeply informed yet highly readable, this magisterial book illumines a major turning-point in the history of human consciousness. It will be mandatory reading for all who appreciated The Pursuit of the Millennium.

Cosmos, Chaos and the World to Come Reviews

"Learned, fascinating and readable... Norman Cohn combines scrupulous scholarship with readability in a unique way... This book will become a classic." Anthony Storr, Independent on Sunday "A cool draught of wise and intelligent scholarship." J. D. F. Jones, Financial Times "This is an exciting as well as a learned book, not only for those students of ancient religion but for those with any interest in modern apocalyptic faith." Jasper Griffin, New York Review of Books "Anyone concerned with the history of apocalypticism and millennial cults, whether ancient, medieval, or modern, should read this book carefully." E. Randolph Daniel, Church History "[A] rich tapestry encompassing history, archaeology, popular culture, mythology and religion.... Cohn's depth and breadth of knowledge is marvelous, his enthusiasm for the subject is infectious. Well-documented and extremely readable, this is highly recommended for religion, history, and seminary collections." - Library Journal "An incisive study of ancient religion and the rise of belief in an impending apocalypse.... A tight, intelligent study." - Kirkus Reviews "Cohn's lucid writing style and his detailed notational listings will make Cosmos, Chaos, and the World to Come an interesting read and a useful tool for students of ancient history and religion." - Charles Odahl, Historian "The author has given us a panorama of beliefs about the driving forces of good and evil in the universe, extending back to the earliest settled communities in the Near East. He has shown the value of the comparative study of religion in understanding the origins of some of the most important among traditional Christian beliefs.... A stimulating work of learning." - W. H. C. Friend, Church Times

Norman Cohn is professor emeritus at the University of Sussex and author of Noah's Flood: The Genesis Story in Western Thought, also published by Yale University Press.

GOR001954579
Cosmos, Chaos and the World to Come: The Ancient Roots of Apocalyptic Faith; Second Edition by Norman Cohn
Norman Cohn
Used - Very Good
Paperback
Yale University Press
2001-10-10
256
0300090889
9780300090888
N/A
Book picture is for illustrative purposes only, actual binding, cover or edition may vary.
This is a used book - there is no escaping the fact it has been read by someone else and it will show signs of wear and previous use. Overall we expect it to be in very good condition, but if you are not entirely satisfied please get in touch with us.