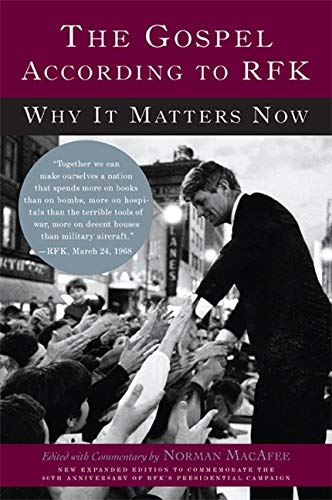 The Gospel According to RFK
by Norman MacAfee

In Stock
$73.99
inc. GST
This collection of RFKs 1968 presidential campaign speeches demonstrates his eloquence, passion, and humanity, while providing a beacon of justice and an example of integrity for politicians and citizens today
Very Good
Only 1 left

The Gospel According to RFK Summary

The Gospel According to RFK: Why It Matters Now: New Expanded Edition by Norman MacAfee

New Expanded Edition to Commemorate the 40th Anniversary of Robert Kennedy's 1968 Presidential Campaign. With 30 pages of new material."He was in many ways the greatest president we never had," writes Norman MacAfee in a new introduction to this revised edition of The Gospel According to RFK: Why It Matters Now . In the 81 days of his campaign, RFK outlined what seems today a redemptive vision for America: ending war and decreasing the gap between the races and classes, between rich and poor, black and brown and white. And then he was assassinated on June 5. But his words and thoughts and speeches remain to challenge and inspire. Included in The Gospel According to RFK are Kennedy's lengthy condemnation of war and his extraordinary, extemporaneous eulogy for Martin Luther King. Speeches new to this edition include"On the Mindless Menace of Violence" and Senator Edward Kennedy's eulogy for his brother at Saint Patrick's Cathedral. The Gospel According to RFK is filled with ideas that can be used to make a better world. It is for Democrats, liberals, independents, progressives and even some Republicans to read for inspiration and guidance. As Kennedy said,"Together we can make ourselves a nation that spends more on books than on bombs, more on hospitals than the terrible tools of war, more on decent houses than military aircraft."

The Gospel According to RFK Reviews

DailyKos
""The Gospel According to RFK: Why it Matters" should be required reading for all of today's progressives (and probably for all high school students).... After reading this book, I could understand how Bobby Kennedy represented, more than anything else, hope. His words are truly moving. His loss is a terrible tragedy."
Mary Garrett, "The Advocate Newspaper," Tennessee
""The Gospel According to RFK" recounts the best of the campaign speeches made by RFK in the first 81 days of the campaign and the last 81 days of his life.... His speeches championing peace, justice, the environment, education, healthcare, and national unity are classics, not classics of studied, stilted rhetoric but classics of the eloquence that comes when a speaker's heart is in the words, shining through. As an unabashed admirer of RFK, editor Norman MacAfee's commentary ties this brief but powerful book together in seamless, memorable style.... Whatever the reader's politics, "The Gospel According to RFK" contains inspiring words to read and re-read for the sure and certain belief Robert Kennedy held that America was, as Thomas Jefferson proposed, the 'last best hope of mankind.'"
"The Democratic Daily"
"The best book for converting your Republican friends to our side: "The Gospel According to RFK" by Norman MacAfee."

Norman MacAfee's other books include the poetry books, One Class The Coming of Fascism to America and A New Requiem and The Death of the Forest, opera to music of Charles Ives. MacAfee co-translated a volume of the poetry of Pier Paolo Pasolini two volumes of the letters of Jean-Paul Sartre to Simone de Beauvoir, Witness to My Life and Quiet Moments in a War and Victor Hugo's Les Miserables. He lives in New York City.

GOR010091239
The Gospel According to RFK: Why It Matters Now: New Expanded Edition by Norman MacAfee
Norman MacAfee
Used - Very Good
Paperback
INGRAM PUBLISHER SERVICES US
2008-04-01
208
0465003583
9780465003587
N/A
Book picture is for illustrative purposes only, actual binding, cover or edition may vary.
This is a used book - there is no escaping the fact it has been read by someone else and it will show signs of wear and previous use. Overall we expect it to be in very good condition, but if you are not entirely satisfied please get in touch with us.