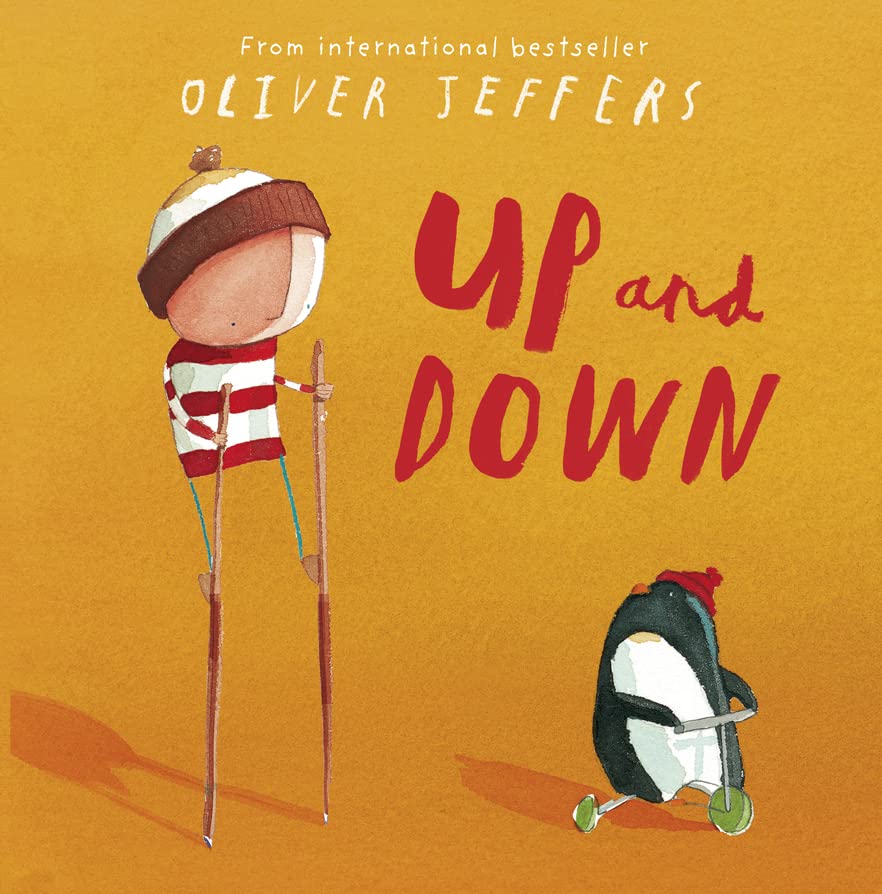 Up And Down
by Oliver Jeffers

READ BY RICHARD E. GRANT. In this much-anticipated sequel to the internationally best-selling picture book Lost and Found, we re-visit the boy and the penguin after their trip to the South Pole...

Up And Down Summary

Up And Down by Oliver Jeffers

READ BY RICHARD E. GRANT. In this much-anticipated sequel to the internationally best-selling picture book Lost and Found, we re-visit the boy and the penguin after their trip to the South Pole...

The boy and the penguin still enjoy spending all their time together... That is, until the penguin starts to dream of flying, ignoring the boy's advice that it is impossible.

Running away, the penguin visits place after place, searching for a chance to get his feet off the ground. But will flying be everything he had hoped? And is the boy missing him as much as he is missing the boy?

A heart-warming story about friendship, love and reaching for your dreams, from highly-regarded, multi-award-winning author-illustrator Oliver Jeffers.

Customer Reviews - Up And Down

Up And Down Reviews

"Visually witty, poignant and spare, it is sure to stoke the author's huge popularity" Culture, Sunday Times

"Jeffers's minimalist style enhances this touching and funny story about friendship, and even though the illustrations are so spare, they convey beautifully the emotions of the characters and contain little details which children will love" School Librarian

"A lovely story about friendship and caring" The Independent on Sunday

Oliver Jeffers graduated from The University of Ulster in 2001 with First Class honours. His outstanding talent has been recognised by several high-profile awards, including the Nestle Children's Book Prize Gold Award. `Lost and Found' animation was broadcast on Channel 4. Oliver lives and works in Brookyln, New York.

GOR003885514
Up And Down by Oliver Jeffers
Oliver Jeffers
Used - Very Good
Hardback
HarperCollins Publishers
2011-09-01
40
0007440456
9780007440450
N/A
Book picture is for illustrative purposes only, actual binding, cover or edition may vary.
This is a used book - there is no escaping the fact it has been read by someone else and it will show signs of wear and previous use. Overall we expect it to be in very good condition, but if you are not entirely satisfied please get in touch with us.