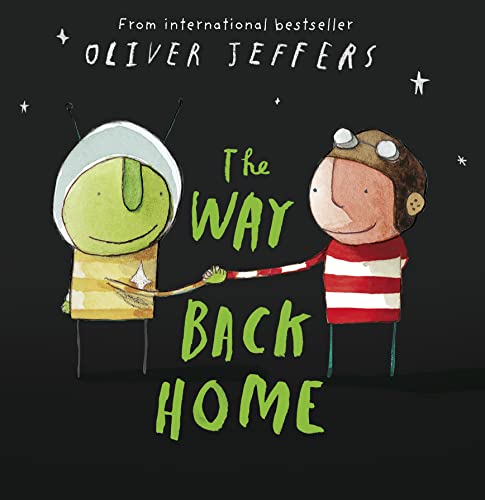 The Way Back Home
by Oliver Jeffers

The Way Back Home Summary

The Way Back Home by Oliver Jeffers

Once there as a boy, and one day, he found an aeroplane in his cupboard...

He didn't remember leaving it in there, but he thought he'd take it out for a go right away. At first, all went well and the plane flew higher and higher and higher until... suddenly, with a splutter, it ran out of petrol. The boy was stuck on the moon... and he was not alone...

Customer Reviews - The Way Back Home

The Way Back Home Reviews

Praise for `Lost and Found':

`An uplifting story...pictures of such spare beauty...suffused with a dreamlike quality.' Independent Online

`Oliver Jeffers makes impressive use of space in this affecting story of friendship...illustrations capture feelings of loss and loneliness through the most delicate nuances of facial expression...and body language.' Julia Eccleshare, The Guardian

Praise for `How to Catch a Star':

`A story about possibilities and disappointments with a triumphant ending, all of which Jeffers captures through the beautifully expressive changing moods of his little boy.' The Guardian

Oliver Jeffers graduated from The University of Ulster in 2001 with First Class honours. His outstanding talent has been recognised by several high-profile awards, including the Nestle Children's Book Prize Gold Award. `Lost and Found' animation was broadcast on Channel 4. Oliver lives and works in Brookyln, New York.

GOR008267508
The Way Back Home by Oliver Jeffers
Oliver Jeffers
Used - Like New
Paperback
HarperCollins Publishers
2008-05-05
32
0007182325
9780007182329
Short-listed for Kate Greenaway Medal 2009 Short-listed for Dublin Airport Authority Irish Children's Book of the Year Award: Junior 2008
Book picture is for illustrative purposes only, actual binding, cover or edition may vary.
The book has been read, but looks new. The book cover has no visible wear, and the dust jacket is included if applicable. No missing or damaged pages, no tears, possible very minimal creasing, no underlining or highlighting of text, and no writing in the margins.