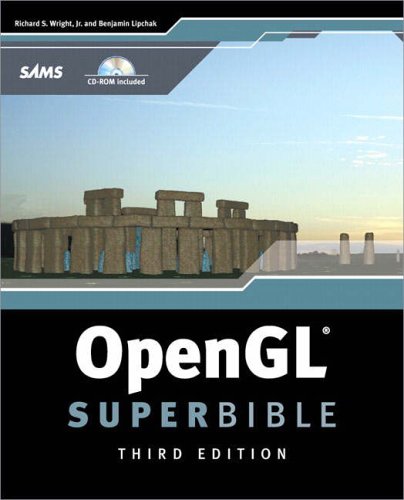 A comprehensive, hands-on guide to the new functionality of OpenGL 2.0.

In a world where everything from how we take pictures to how we get our food is designed to happen as quickly and easily as possible, it can take a lot longer to learn how to make it all work behind the scenes. Theories and concepts can weigh you down when all you really want to know is how to create, design and go. That's where OpenGL SuperBible comes in. Complete with supporting figures and a CD packed with free tools, demos and libraries, OpenGL SuperBible simplifies 3D programming concepts without wasting your time with programming theory. Mac and Windows users will both find this comprehensive hands-on guide helpful as you learn to program for games, visualization applications and multi-platforms. This is the ultimate resource for any new programmer.

About OpenGL Architecture Review Board

Richard S. Wright, Jr. has used OpenGL for 10 years and teaches OpenGL programming in the game design degree program at Full Sail in Orlando, Florida. He is a former Real 3D representative to the OpenGL Architecture Review Board and has delivered multiple commercial applications that use OpenGL extensively, including games, scientific and medical applications, database visualization and educational software. Lead author of the first and second editions of OpenGL SuperBible, he is also the founder and president of Starstone Software Systems, Inc., where he develops multimedia simulation software for the PC and Macintosh platforms using OpenGL.

1. Introduction to 3D Graphics and OpenGL.

5. Color, Materials, and Lighting: The Basics.

6. More on Colors and Materials.

9. Texture Mapping: Beyond the Basics.

11. It's All About the Pipeline: Faster Geometry Throughput.

III. OPENGL: THE NEXT GENERATION.

16. Buffer Objects: It's Your Video Memory; You Manage It!

17. Occlusion Queries: Why Do More Work Than You Need To?

20. Low-Level Shading: Coding to the Metal.

GOR003590916
OpenGL SuperBible by OpenGL Architecture Review Board
OpenGL Architecture Review Board
Used - Very Good
Hardback
Pearson Education (US)
2004-06-30
1200
0672326019
9780672326011
N/A
Book picture is for illustrative purposes only, actual binding, cover or edition may vary.
This is a used book - there is no escaping the fact it has been read by someone else and it will show signs of wear and previous use. Overall we expect it to be in very good condition, but if you are not entirely satisfied please get in touch with us.