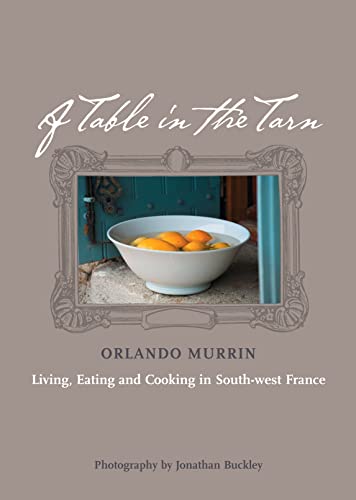 A Table in the Tarn
by Orlando Murrin

Used Price
$25.99
inc. GST
Free Shipping in Australia
While walking in South-west France, cook and journalist Orlando Murrin dreamed up the adventure of a lifetime: why not wave goodbye to the rat race and come to live in this rural paradise, where the only traffic is the boulangerie van delivering baguettes? His book tells the story of how he set up a boutique b&b and includes 100 amazing recipes.
Reviews:
Trustpilot
Very Good Good Well Read

A Table in the Tarn Summary

A Table in the Tarn: Living, Eating and Cooking in South-west France by Orlando Murrin

While walking in South-west France, cook and journalist Orlando Murrin dreamed up the adventure of a lifetime: why not wave goodbye to the rat race and come to live in this rural paradise, where the only traffic is the boulangerie van delivering baguettes? His book tells the story of how he set up a boutique b&b and includes 100 amazing recipes.

The story of the Manoir de Raynaudes begins on New Year's Eve 2001 when Orlando and his partner first glimpse the ruined manoir at dusk. Set in 13 acres of lush meadow, woodland, lakes and garden, they set about transforming the dignified old manor house into a phenomenally successful boutique b&b with its own magnificent kitchen garden.

A Table in the Tarn charts the discovery, acquisition and renovation of the property. Along the way, we learn about the local food scene, with its astonishingly rich heritage of ingredients and dishes, about working in France and coping with the famous French bureaucracy, and about the unforeseen delight of working with the locals.

Four years on, with countless plaudits and a coveted entry in the classy Mr and Mrs Smith directory, the business attracts visitors from around the world and continues to be a gastronomic destination for anyone seeking peace, tranquillity and above all fantastic food.

Everything at the Manoir is home made, from breakfast breads to after-dinner chocolates, and the book includes 100 recipes. From the sublime Roquefort Brioche via Savoury Mini Clafoutis and Roast Pigeon Breasts in Armagnac to the unparalleled Chocolate Nirvana with Creme Anglaise, this collection of recipes offers a vivid experience of life in rural France. Cooks everywhere will devour the descriptions of country cooking as mastered by generations of French cooks.

Not only will you learn the insider secrets of making acclaimed dishes from the Manoir, but find out what it's like to make a dream come true.

Customer Reviews - A Table in the Tarn

A Table in the Tarn Reviews

`If there is any justice in the market, Murrin's book will break all records - it is beautiful and perfectly executed...the nature and identity of the house at its centre - the elegant Manoir de Raynaudes - haunts every recipe and every word on the pages. This is quite simply a joy of a book.' Simon Gallagher, Borders.

`One of the best books of 2003, this is bursting with savvy and style. Best of all, you don't have to be a skilled cook to get great results' Jennie Muir, Independent

`A year after it was published, I'm still recommending this book to anyone who has to entertain guests but lacks confidence' Jenni Muir, the Independent Review

`The book shimmers with verve, style and dash, the photographs make the simple look sophisticated and the recipes... are remarkably clever and appealing.' Henrietta Green, Daily Mail

`This book landed on my desk on the hottest day of the year. I have been using it ever since.' Leslie Geddes-Brown, Country Life

`Lazy cooks have been fighting to get this book off the shelves.' The Week

After reading English at Cambridge Orlando Murrin became a journalist. While working on Cosmopolitan, his lifelong passion for cooking resulted in him reaching the semi-finals of BBC2's Masterchef. In 1997 his career and his culinary skills were combined in the role of Editor, BBC Good Food magazine. His first cookbook, The Clever Cook, was a collection of his columns for the Daily Express. In 2003, he published The No Cook Cookbook. His boutique b&b, The Manoir de Raynaudes, opened in June 2004.

GOR003845091
A Table in the Tarn: Living, Eating and Cooking in South-west France by Orlando Murrin
Orlando Murrin
Used - Very Good
Hardback
HarperCollins Publishers
2008-04-01
256
0007263945
9780007263943
N/A
Book picture is for illustrative purposes only, actual binding, cover or edition may vary.
The book has been read but remains in clean condition. All pages are intact and the cover is intact. Some minor wear to the spine.