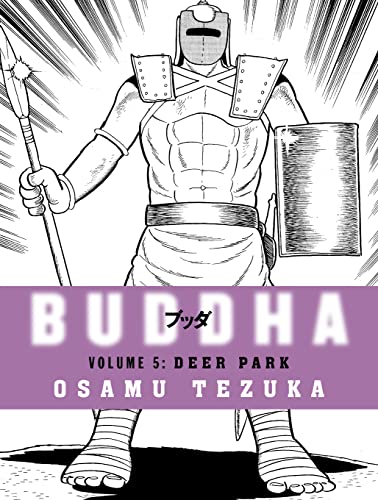 The fifth book in the classic eight volume graphic novel series retelling the story of Buddha, from the godfather of the genre.

The fifth book in the classic eight volume graphic novel series retelling the story of Buddha, from the godfather of the genre.

In book five, rising from the shade of the Pippla tree, Buddha must spread the word of Brahma to his fellows, be they human or animal. He will confront Devadatta's ruthless ambition, soothe Tatta's thirst for revenge and will even reach out to the stubborn monk Dhepa. But forgiving the Kingdom of Kosala for the devastation wreaked upon his homeland could prove to be Buddha's greatest challenge yet.

Originated in the 1970s, Buddha is Osamu Tezuka's unparalleled rendition of the life and times of Prince Siddhartha. Tezuka's storytelling genius and consummate skill at visual expression blossom fully as he contextualizes the Buddha's ideas, with an emphasis on action, emotion, humour and conflict as Prince Siddhartha runs away from home, travels across India and questions Hindu practices such as ascetic self-mutilation and caste oppression. Rather than recommend resignation and impassivity, Tezuka's Buddha predicates enlightenment upon recognizing the interconnectedness of life, having compassion for the suffering, and ordering one's life sensibly. Furthermore, his approach is slightly irreverent in that it incorporates something that Western commentators often eschew, namely, humour.

`If you've never tried something like this before, check it out; it's fascinating stuff. An engrossing read that you'll get through in no time. And then you'll want the other seven instalments.'
Starburst

`If it weren't for [Tekuza] and his ripping religious yarns, we wouldn't have had Akira.'
Arena

`You simply won't find anyhting else quite touches Tezuka's innovative use of the manga format, his humour, his intuitive understanding of human nature and his sympathy for the main characters.'
Neo [the UK's number one manga magazine]

Osamu Tezuka (1928-89) is the godfather of Japanese graphic novels. A genuine intellectual, deeply familiar with Western culture from the Bible to Goethe to Hollywood, Tezuka originally intended to become a doctor and received an M.D. Though many have followed his example, it is still Tezuka who draws the deepest awe with his sweeping vision, deftly intertwined plots, persuasive characters, feel for the workings of power, and above all, an indefatigable commitment to human dignity and the sanctity of life.

GOR001964394
Deer Park (Buddha, Book 5) by Osamu Tezuka
Osamu Tezuka
Buddha
Used - Very Good
Paperback
HarperCollins Publishers
2006-06-05
400
0007224559
9780007224555
N/A
Book picture is for illustrative purposes only, actual binding, cover or edition may vary.
This is a used book - there is no escaping the fact it has been read by someone else and it will show signs of wear and previous use. Overall we expect it to be in very good condition, but if you are not entirely satisfied please get in touch with us.