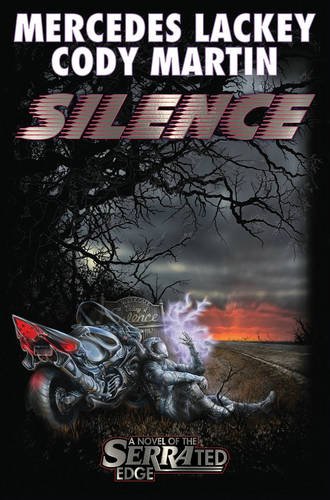 SILENCE by Other BAEN BOOKS

SILENCE by Other BAEN BOOKS

Teenager Staci's father has just remarried, and now she finds herself being shunted aside by her new stepmother. Shunted all the way to the run-down and dying Maine town of Silence, in fact, and the custody of her alcoholic mother. Silence seems to be
Mercedes Lackey is the New York Times best-selling author of the Bardic Voices series and the Serrated Edge series (both Baen), the Heralds of Valdemar series, and many more. She's the coauthor of the contemporary meta-hero SF series The Secret World Chronicle. Among her popular Baen titles are The Fire Rose, The Lark and the Wren, and also The Shadow of the Lion and Burdens of the Dead with Eric Flint and Dave Freer. She lives in Oklahoma.

Cody Martin is a coauthor with Mercedes Lackey of three other books in the metahero saga, The Secret World Chronicle including entries Invasion, World Divided, Revolution, and Collision. He is an avid gamer, but spends his extra time chained to a computer, writing. Originally from Scottsdale, Arizona, he currently resides in Florida.

GOR008654609
9781481482400
1481482408
SILENCE by Other BAEN BOOKS
Other BAEN BOOKS
Used - Very Good
Paperback
Baen Books
2017-03-06
464
N/A
Book picture is for illustrative purposes only, actual binding, cover or edition may vary.
This is a used book - there is no escaping the fact it has been read by someone else and it will show signs of wear and previous use. Overall we expect it to be in very good condition, but if you are not entirely satisfied please get in touch with us
Trustpilot