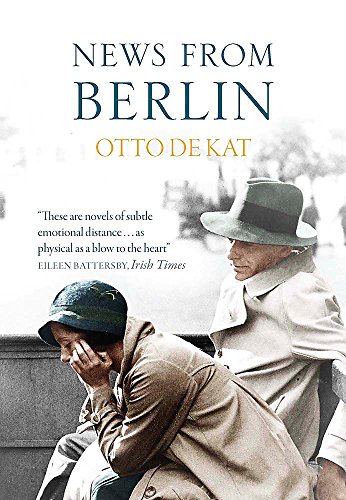 Used Price
$14,99
inc. GST
Free Shipping in Australia
1941. A Dutch diplomat learns of Hitler's plans for Russia. His family is at risk. Should he raise the alarm or put them first?
Reviews:
Trustpilot
Very Good Good

June 1941. Dutch diplomat Oscar Verschuur has been posted to neutral Switzerland. His family is spread across Europe. His wife Kate works as a nurse in London and their daughter Emma is living in Berlin with her husband Carl, a 'good' German who works at the Ministry of Foreign Affairs.

Briefly reunited with her father in a restaurant in Geneva, Emma drops a bombshell. A date and a codename, and the fate of nations is placed in Verschuur's hands: June 22, Barbarossa.

What should he do? Warn the world, or put his daughter's safety first? The Gestapo are watching them both. And with Stalin lulled by his alliance with Hitler, will anyone even listen?

Otto de Kat is fast gaining a reputation as one of Europe's sharpest and most lucid writers. News from Berlin, a book for all readers, a true page-turner driven by the pulse of a ticking clock, confirms him as a storyteller of subtly extravagant gifts.

'A compelling portrait of love, loss and regret' -- Lucy Popescu * Independent on Sunday *
'A masterclass in how less can be more, packed full of atmosphere, emotion and philosophical debate' -- Kathy Stephenson * Daily Mail *
'A sweeping epic, even though it's only 200 pages long ... Enough material for a 12-part TV miniseries ... de Kat can break your heart in 200 words, never mind 200 pages' -- Roger Cox * Scotland on Sunday *

Otto de Kat is the pen name of the founder of Dutch non-fiction publishing house Balans, Jan Guert Gaarlandt, also a poet, novelist and critic. His prize-winning novels have been widely published in Europe, and Man on the Move was the winner of the Netherlands' Halewijn Literature Prize. Ina Rilke is the prize-winning translator of books by Cees Nooteboom, W.F. Hermans, Tessa de Loo, Dai Sijie and Margriet de Moor.