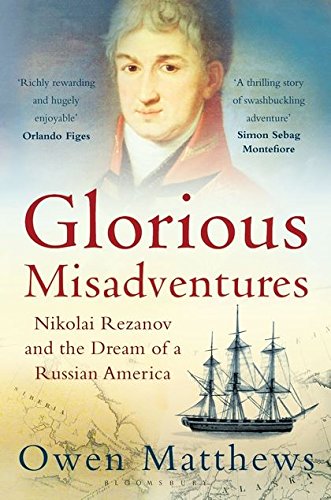 Glorious Misadventures: Nikolai Rezanov and the Dream of a Russian America by Owen Matthews

The Russian Empire once extended deep into America: in 1818 Russia's furthest outposts were in California and Hawaii. The dreamer behind this great Imperial vision was Nikolai Rezanov - diplomat, adventurer, courtier, millionaire and gambler. His quest to plant Russian colonies from Siberia to California led him to San Francisco, where he was captivated by Conchita, the fifteen-year-old daughter of the Spanish Governor, who embodied his dreams of both love and empire. From the glittering court of Catherine the Great to the wilds of the New World, Matthews conjures a brilliantly original portrait of one of Russia's most eccentric Empire-builders.

Richly rewarding and hugely enjoyable, Glorious Misadventures is a flamboyant history of sea-faring adventures, imperial encounters, missed opportunities and lost loves which takes the reader back to that long forgotten age when the Russians and the Spanish were the masters of the wilderness between Alaska and California * Orlando Figes *
A thrilling story of swashbuckling adventure and flamboyant derring-do about a neglected but intriguing episode of Russian-American history, Owen Matthews chronicles the shambolic, often-forgotten and short-lived Russian empire in America, combining fresh research with a compelling narrative * Simon Sebag Montefiore *
Rezanov is the central character in Owen Matthews's enthralling account of Russia's great misfire: its attempt to colonise America. Many know that Russia sold Alaska to America, rather cheaply in 1867, fearing that it had become indefensible. But few know how it had become Russian in the first place ... Glorious Misadventures is in part this extraordinary man's biography ... His voyage to the Pacific, with shipmates even more mercurial, reads like an implausibly lively historical novel ... The exotic personalities and adventures come against a backdrop of geopolitical tussles between France, Spain, Russia and Britain. Mr Matthews depicts them neatly, and paints enjoyable cameos ... The book bursts with telling details, many of them gruesome ... [An] exemplary account of adventures that could have changed the world * Economist *
His impressive research has yielded not only a rollicking tale of derring-do, patriotism, endurance, low cunning and occasional bravery, but is a devastating indictment of why Russians made such hopeless colonists ... Matthews's vivid and hilarious account illustrated by sketches by the ship's cultured doctor and naturalist, leads up to the final disaster ... As with everything else in this enthralling account, Russia lost out through bad timing and bad judgment * The Times *
The brutality and folly of Russia's bid to conquer America has the makings of grand tragicomedy ... This is a book that starts in pretty high gear. The human detail is compelling, the geopolitics well outlined, the brutality and folly ... Tragicomic. At its centre Rezanov ... Is an engaging antihero. Where it really hits its stride is with the story of Rezanov's hopeless mission to Japan ... But this story is more than just an aggregate of quirky, funny details. Matthews has an excellent quick sense of the absurd, and his footnotes are great ... But he also manages to spin his analysis into an aphoristic style that's fresh and penetrating without seeming glib ... Creeping underneath the historical narrative, too, is a sort of covert travel book. Matthews has been to these places, and gets over a wonderful and personal sense of what Northern Mongolia ... Or Spruce Island ... Are like now, and might have been like then. Really, this is a blindingly good story extremely well told. Go, read. It will make you laugh, stretch your eyes and give thanks that you don't live in anything remotely resembling late 18th-century Siberia * Sam Leith, Spectator *
A moving account of his Russian family's travails in the Soviet Union ... Intriguing ... Where his book does grip is in its background story of Russia's eastward expansion, driven by its hunger for furs ... Matthews has travelled many of the routes these often desperate men took, and his descriptions of them, and of the vast, inhospitable wildernesses through which they travelled, are compelling * Andrew Holgate, Sunday Times *
A swashbuckling Tsarist Russian in America ... Told by Matthews, the story loses none of its strangeness and its swashbuckling verve, reading at times like a cross between Conrad's Heart of Darkness and Gogol's the Government Inspector * Financial Times *
The story of the expedition and of how close Russia came to extending its American colonies south to the Mexican border are the subjects of this rich, fascinating and thoroughly enjoyable book * Anna Reid, Literary Review *
Mr Matthews doesn't need success stories or heroes to shine his entertaining light on this dark and hidden corner of history: his gift for storytelling does that alone * Country Life *
A fascinating byroad of history ... A breathlessly rip-roaring tale * Metro *
Owen Matthews relates the story of the courtier Nikolai Rezanov's attempts to settle America for Russia. And, were it not for the author's painstaking research and copious footnotes, Rezanov's life would read like an outrageous ripping yarn ... Matthews has an engaging style which makes the complexities of Russian politics less taxing than they might otherwise be. He has travelled to many of the places Rezanov knew and there is a strong thread of travelogue woven into the biography. His finely-tuned sense of the absurd is brought to the fore in the episode where Rezanov is sent by the Tsar to Japan as an emissary ... Rezanov is an astonishing character: his swashbuckling charisma and ambition far outpaced his abilities as a courtier, but he is captivating in both in his triumphs and tragedies. Matthew's footnotes, full of fascinating details, also display his wry humour. He has penned a compelling tale with a flawed hero whose story deserves to be better known, and he more than does his flamboyant subject justice * Independent on Sunday *
Generous with eloquent detail ... the facts, as Owen Matthews renders them, are amazing * Times Literary Supplement *

Owen Matthews was born in London and spent part of his childhood in America. He studied Modern History at Oxford University before beginning his career as a journalist in Bosnia. In 1995 he accepted a job at The Moscow Times, a daily English-language newspaper. He also freelanced for a number of publications including The Times, the Spectator and the Independent. In 1997, he became a correspondent at Newsweek magazine in Moscow where he covered the second Chechen war. Owen was also one of the first journalists to witness the start of the US bombing in Afghanistan, 2001, and went on to cover the invasion of Iraq, 2003. His first book on Russian history, Stalin's Children, was published to great critical acclaim in 2008. Owen is currently Newsweek magazine's bureau chief in Moscow, where he lives with his wife and two children.

GOR006152872
Glorious Misadventures: Nikolai Rezanov and the Dream of a Russian America by Owen Matthews
Owen Matthews
Used - Very Good
Paperback
Bloomsbury Publishing PLC
2014-07-31
400
1408833999
9781408833995
N/A
Book picture is for illustrative purposes only, actual binding, cover or edition may vary.
This is a used book - there is no escaping the fact it has been read by someone else and it will show signs of wear and previous use. Overall we expect it to be in very good condition, but if you are not entirely satisfied please get in touch with us.