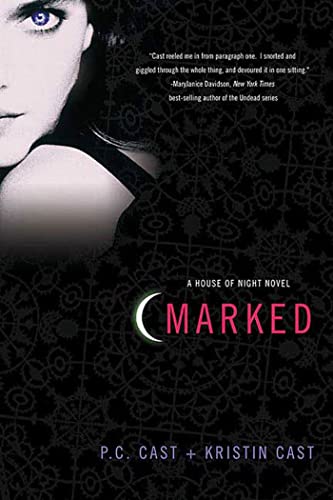 In Stock
$17.49
inc. GST
Zoey enters the House of Night, a school where, after having undergone the Change, she will train to become an adult vampyre - that is, if she makes it through the Change. Not all of those who are chosen do. She has been Marked as special by the vampyre Goddess, Nyx. But she is not the only fledgling at the House of Night with special powers.
Very Good Good
5 in stock

"The House of Night" series is set in a world very much like our own, except in sixteen-year-old Zoey Redbird's world, vampyres have always existed. In this first book in the series, Zoey enters the House of Night, a school where, after having undergone the Change, she will train to become an adult vampyre - that is, if she makes it through the Change. Not all of those who are chosen do. It's tough to begin a new life, away from her parents and friends, and on top of that, Zoey finds she is no average fledgling. She has been Marked as special by the vampyre Goddess, Nyx. But she is not the only fledgling at the House of Night with special powers. When she discovers that the leader of the Dark Daughters, the school's most elite club, is misusing her Goddess-given gifts, Zoey must look deep within herself for the courage to embrace her destiny - with a little help from her new vampyre friends.

"From the moment I stuck my face in this book it hooked me! Totally awesome new take on vampires! Marked is hot and dark and funny. It rocks!" --Gena Showalter, author of MTV's Oh My Goth

"Cast reeled me in from paragraph one. I snorted and giggled through the whole thing, and devoured it in one sitting." --MaryJanice Davidson, New York Times best-selling author of the Undead series

P.C. Cast is an award-winning fantasy and paranormal romance author, as well as an experienced speaker and teacher. With her daughter Kristin Cast, she is the author of the House of Night novels, including Awakened, Burned and Hunted. Cast was born in the Midwest, and as a girl fell in love with mythology. After high school, she joined the U.S. Air Force, then taught high school for 15 years before retiring to write full time. Cast's novels are New York Times bestsellers and have been awarded the Oklahoma Book Award, YALSA Quick Pick for Reluctant Readers, Romantic Times Reviewers' Choice Award, the Prism, Holt Medallion, Daphne du Maurier, Booksellers' Best, and the Laurel Wreath. Ms. Cast lives in Oklahoma, where she is a member of the Oklahoma Writers' Hall of Fame. She splits her time between her ranch and midtown Tulsa where she has a home just down the street from the House of Night...

Kristin Cast has won awards for her poetry and journalism. She also lives in Oklahoma, where she attends college in Tulsa.

GOR001621463
Marked by P. C. Cast
P. C. Cast
House of Night Novel
Used - Very Good
Paperback
Griffin Publishing
2007-05-01
304
0312360266
9780312360269
Winner of Oklahoma Book Award (Young Adult) 2008 Short-listed for Colorado Blue Spruce Award 2010
Book picture is for illustrative purposes only, actual binding, cover or edition may vary.
This is a used book - there is no escaping the fact it has been read by someone else and it will show signs of wear and previous use. Overall we expect it to be in very good condition, but if you are not entirely satisfied please get in touch with us.