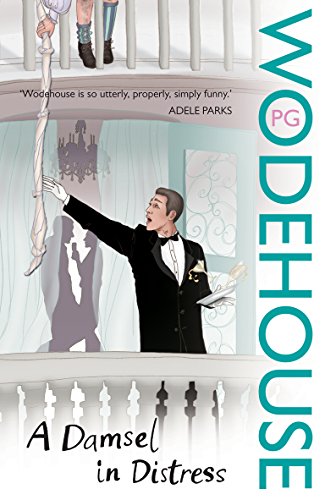 A Damsel in Distress
by P.G. Wodehouse

Used Price
$34.99
inc. GST
Free Shipping in Australia
Lady Maud, the young daughter of the Earl of Marshmoreton, is confined to her home, Belpher Castle in Hampshire, under aunt's orders because of an unfortunate infatuation. George Bevan, an American who writes songs for musicals and is so smitten with Maud that he descends on Hampshire's rolling acres to see off his rival and claim her heart.
Reviews:
Trustpilot
Very Good Good

A Damsel in Distress Summary

A Damsel in Distress by P.G. Wodehouse

Lady Maud, the spirited young daughter of the Earl of Marshmoreton, is confined to her home, Belpher Castle in Hampshire, under aunt's orders because of an unfortunate infatuation. Enter our hero, George Bevan, an American who writes songs for musicals and is so smitten with Maud that he descends on Hampshire's rolling acres to see off his rival and claim her heart. Meanwhile, in the great Wodehousian tradition, the Earl of Marshmoreton just wants a quiet life pottering in his garden, supported by his portly butler Keggs and free from the demands of his bossy sister and his silly-ass son.

It is a sunny story which involves misunderstandings, butlers and gentle hearts torn asunder only to be reunited at last. This delightful novel which was twice filmed (once as a musical starring Fred Astaire) has all the wit and lightness of touch that we expect from the great comic writer.

Customer Reviews - A Damsel in Distress

A Damsel in Distress Reviews

It's dangerous to use the word genius to describe a writer, but I'll risk it with him -- John Humphrys
Not only the funniest English novelist who ever wrote but one of our finest stylists -- Susan Hill
For as long as I'm immersed in a P.G. Wodehouse book, it's possible to keep the real world at bay and live in a far, far nicer, funnier one where happy endings are the order of the day -- Marian Keyes
Wodehouse always lifts your spirits, no matter how high they happen to be already -- Lynne Truss
The incomparable and timeless genius - perfect for readers of all ages, shapes and sizes! -- Kate Mosse

GOR002561046
A Damsel in Distress by P.G. Wodehouse
P.G. Wodehouse
Used - Very Good
Paperback
Cornerstone
2008-10-02
304
0099514133
9780099514138
N/A
Book picture is for illustrative purposes only, actual binding, cover or edition may vary.
This is a used book - there is no escaping the fact it has been read by someone else and it will show signs of wear and previous use. Overall we expect it to be in very good condition, but if you are not entirely satisfied please get in touch with us.