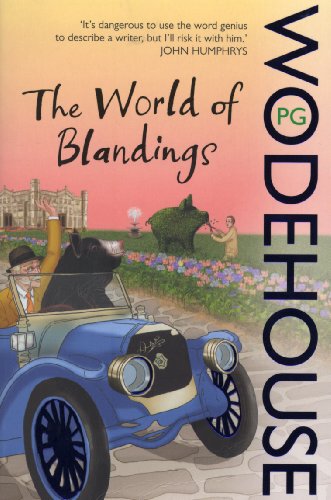 The World of Blandings
by P. G. Wodehouse

In Stock
23,49 $
inc. GST
A Blandings', the fattest pig in Shropshire and England, omnibus. It contains "Something Fresh", "Summer Lightning" and three short stories.
Very Good
Only 2 left

The World of Blandings Summary

The World of Blandings: (Blandings Castle) by P. G. Wodehouse

In this wonderfully fat omnibus, which seems to span the dimensions of the Empress of Blandings herself (the fattest pig in Shropshire and surely all England), the whole world of Blandings Castle is spread out for our delectation: the engagingly dotty Lord Emsworth and his enterprising brother Galahad, his terrifying sister Lady Constance, Beach the butler (his voice 'like tawny port made audible'), James Wellbeloved, the gifted but not always sober pigman, and Lord Emsworth's secretary the Efficient Baxter, with gleaming spectacles, whose attempts to bring order to the Castle always end in disarray.

Lurking in the wings is Sir Gregory Parsloe-Parsloe of Matchingham Hall, the neighbour with designs on the Prize which must surely belong to the Empress.

As Evelyn Waugh wrote, 'The gardens of Blandings Castle are that original garden from which we are all exiled.'

The World of Blandings Reviews

Each time you read another Blandings story, the sublime nature of that world is such as to make you gasp * Stephen Fry *
It's dangerous to use the word genius to describe a writer, but I'll risk it with him * John Humphrys *
A genius ... Elusive, delicate but lasting * Alan Ayckbourn *
Not only the funniest English novelist who ever wrote but one of our finest stylists * Susan Hill *
For as long as I'm immersed in a P.G. Wodehouse book, it's possible to keep the real world at bay and live in a far, far nicer, funnier one where happy endings are the order of the day * Marian Keyes *

GOR001580622
The World of Blandings: (Blandings Castle) by P. G. Wodehouse
P. G. Wodehouse
Blandings Castle
Used - Very Good
Paperback
Cornerstone
2008-10-02
656
0099514249
9780099514244
N/A
Book picture is for illustrative purposes only, actual binding, cover or edition may vary.
This is a used book - there is no escaping the fact it has been read by someone else and it will show signs of wear and previous use. Overall we expect it to be in very good condition, but if you are not entirely satisfied please get in touch with us.