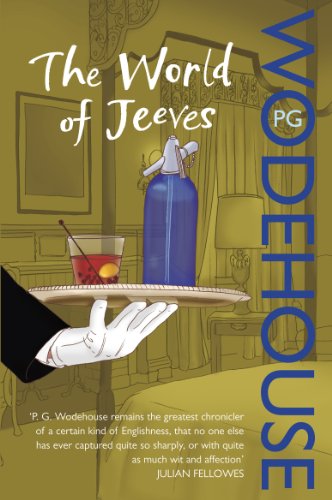 The World of Jeeves
by P. G. Wodehouse

In Stock
$11.99
+10% GST
A Jeeves and Wooster Omnibus'Jeeves knows his place, and it is between the covers of a book.' This is an omnibus of wonderful Jeeves and Wooster stories, specially selected and introduced by Wodehouse himself, who was struck by the size of his selection and described it as almost the ideal paperweight.
Very Good Well Read
Only 2 left

The World of Jeeves Summary

The World of Jeeves: (Jeeves & Wooster) by P. G. Wodehouse

A Jeeves and Wooster Omnibus 'Jeeves knows his place, and it is between the covers of a book.' This is an omnibus of wonderful Jeeves and Wooster stories, specially selected and introduced by Wodehouse himself, who was struck by the size of his selection and described it as almost the ideal paperweight. As he wrote: 'I find it curious, now that I have written so much about him, to recall how softly and undramatically Jeeves first entered my little world. Characteristically, he did not thrust himself forward. On that occasion, he spoke just two lines. The first was: "Mrs Gregson to see you, sir." The second: "Very good, sir, which suit will you wear?" It was only some time later that the man's qualities dawned upon me. I still blush to think of the off-hand way I treated him at our first encounter...'. This omnibus contains Carry On, Jeeves, The Inimitable Jeeves, Very Good, Jeeves and the short stories 'Jeeves Makes an Omelette' and 'Jeeves and the Greasy Bird'.

The World of Jeeves Reviews

"It's dangerous to use the word genius to describe a writer, but I'll risk it with him" * John Humphrys *
"A genius ... Elusive, delicate but lasting" * Alan Ayckbourn *
"Not only the funniest English novelist who ever wrote but one of our finest stylists" * Susan Hill *
"For as long as I'm immersed in a P.G. Wodehouse book, it's possible to keep the real world at bay and live in a far, far nicer, funnier one where happy endings are the order of the day" * Marian Keyes *
"Wodehouse always lifts your spirits, no matter how high they happen to be already" * Lynne Truss *

GOR001662642
The World of Jeeves: (Jeeves & Wooster) by P. G. Wodehouse
P. G. Wodehouse
Jeeves & Wooster
Used - Very Good
Paperback
Cornerstone
2008-10-02
784
0099514230
9780099514237
N/A
Book picture is for illustrative purposes only, actual binding, cover or edition may vary.
This is a used book - there is no escaping the fact it has been read by someone else and it will show signs of wear and previous use. Overall we expect it to be in very good condition, but if you are not entirely satisfied please get in touch with us.