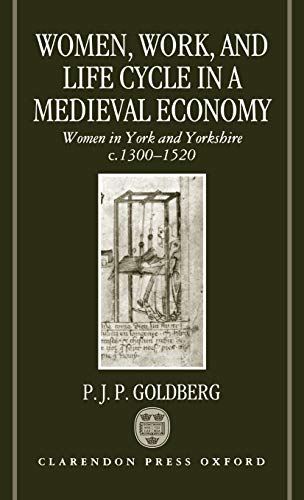 Used Price
$77.99
inc. GST
Free Shipping in Australia
A study of the relationship between women's economic opportunity and marriage in the 14th and 15th centuries, this explores the role of women in the economy and the part that marriage played in their lives. The book is based on a study of York and Yorkshire.
Very Good

Women, Work, and Life Cycle in a Medieval Economy Summary

This is an innovative analysis of the relationship between women's economic opportunity and marriage in the fourteenth and fifteenth centuries. It is based on an intensive study of York and Yorkshire, but also utilizes evidence from other parts of England and continental Europe. P. J. P. Goldberg explores the role of women in the economy and the part that marriage played in their lives. Importantly, he challenges the Wrigley and Schofield thesis of nuptiality: his analysis of the demography of marriage demonstrates that in late medieval Yorkshire, women participated strongly in the labour force, deferring marriage or avoiding it entirely. This is a stimulating and intelligent book, which makes an important contribution to our understanding of medieval ways of life.

Women, Work, and Life Cycle in a Medieval Economy Reviews

'those interested in women's work, in urban history, in regional economies, in the history of family and marriage will learn a lot ... It is a pioneering study of gender relations in work, production and marriage with thought-provoking contemporary resonances.' Times Literary Supplement
'The core of this book is a careful analysis of the interrelationship between women's employment prospects, matrimonial choices, and opportunities for personal freedom in the period after the Black Death ... a succinct general grounding in the current state of the subject that could hardly be bettered.' R.H. Britnell, University of Durham, The Economic History Review, Volume XLVI, No.3, August 1993
`it offers a succinct general grounding in the current state of the subject that could hardly be bettered.' The Economic History Review
'an original and stimulating hypothesis ... this book represents a significant achievement in its presentation of a forceful and generally persuasive argument that will challenge and stimulate scholars for years to come' Maryanne Kowaleski, Fordham University, Social History of Medicine, Vol. 7, No. 2, 1994
'thoughtful study ... An impressive array of secondary material is debated in the course of presenting the book's main argument and ... the discussion of the sources is conducted with insight ... I do not know of a better book than Goldberg's study for an overview of the current debate and a more stimulating study of women's role in the Northern economy will be hard to find.' Frederik Pedersen, Cambridge Group for the History of Population and Social Structure, Community and Change, Volume 9, Part 2 - 1994
'thoughtful and stimulating enquiry ... the study is worth close attention, and contains many important findings and challenging interpretations. This book is notable for the insights which have arisen from its humane approach to its subject, for its substantive findings, and for its carefully elaborated hypotheses.' Derek Keene The Ricordian June '94

York and the regional economy in the later Middle Ages; women and work; servants and servanthood; marriage in town and country; moving to town; patterns of cohesion and residence; women, work and life cycle - a hypothesis explored.