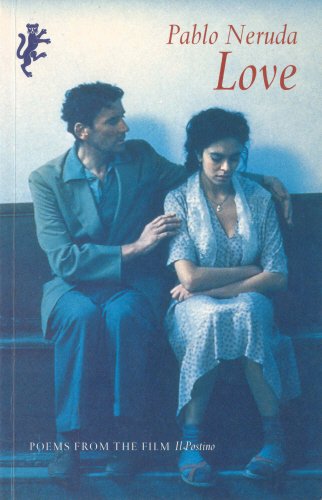 Used Price
$13.99
inc. GST
Free Shipping in Australia
Poems from the Film Il PostinoThe poems collected in this book are at the heart of the film Il Postino, a cinematic fantasy spun from an apocryphal incident in the life of the Chilean poet and Nobel laureate, Pablo Neruda.
Very Good Good Well Read

Poems from the Film Il Postino The poems collected in this book are at the heart of the film Il Postino, a cinematic fantasy spun from an apocryphal incident in the life of the Chilean poet and Nobel laureate, Pablo Neruda. Together they show why many consider Neruda to be the finest love poet of the century. Few writers of any age have described the pleasures and torments of erotic love with such unsentimental directness and sensual precision. Here we find Neruda at his most accessible, the language of his odes and lyrics refined to the point at which it achieves, in critic Jean Franco's words, "the naturalness of song". This short selection draws on work from throughout his writing life, from the famous early collection Twenty Love Songs and a Song of Despair (1924) to the key works of his maturity, Residence on Earth (1935), Elemental Odes (1954) and the autobiographical Memorial de Isla Negra (1964). It offers an enticing glimpse of one of modern poetry's greatest masters.

"Neruda is a monster. Like all great epic monsters, when he's not bellowing, preaching or lamenting, he is capable of amazing delicacy and contained passion, especially in the lyrical poems - sonnets, romances, and free-verse 'odes' - which are netted in this book. It dazzlingly distills a profound, tender imagination" -- Michael Schmidt
"The poems today remain as urgently gorgeous as freshly picked flowers" -- Carol Ann Duffy * Daily Telegraph *

Born Neftal-Ricardo Reyes Basoalto in southern Chile in 1904, Pablo Neruda led a life charged with poetic and political activity. His first book, Crepusculario (Twilight) was published in 1923. The following year, he published Veinte Poemas de Amor y una Cancion Desesperada (Twenty Love Poems and a Song of Despair), which turned him into a celebrity. In 1927 he began his long career as a diplomat, serving as Chilean consul in numerous places including Burma, Buenos Aires, Madrid, Mexico and France. He was elected to the Chilean Senate in 1943 but later expelled for being a Communist. In 1952 the government withdrew the order to arrest leftist writers and political figures, and Neruda returned to Chile. For the next twenty-one years, he continued a career that integrated private and public concerns and became known as the people's poet. During this time, Neruda received numerous prestigious awards, including the International Peace Prize in 1950, the Lenin Peace Prize and the Stalin Peace Prize in 1953, and the Nobel Prize for Literature in 1971. He died of leukaemia in Santiago, Chile in 1973.

GOR001406456
Love by Pablo Neruda
Pablo Neruda
Used - Very Good
Paperback
Vintage Publishing
1995-12-07
48
1860461867
9781860461866
N/A
Book picture is for illustrative purposes only, actual binding, cover or edition may vary.
This is a used book - there is no escaping the fact it has been read by someone else and it will show signs of wear and previous use. Overall we expect it to be in very good condition, but if you are not entirely satisfied please get in touch with us.