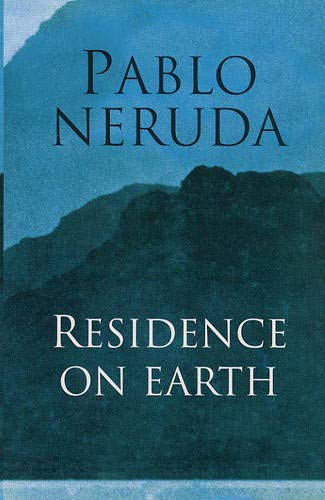 Residence on Earth
by Pablo Neruda

Used Price
$38.99
inc. GST
Free Shipping in Australia
Neruda's greatest achievement, a poetry written to speak of everyday life directly to the reader, where Neruda found his public voice and espoused his political faith that solutions could be found to injustice and misery.
Reviews:
Trustpilot
Very Good Well Read

Residence on Earth by Pablo Neruda

"The greatest poet of the twentieth century - in any language." - Gabriel Garcia Marquez Neruda wrote the first volume of Residence on Earth in 1933 during his years in the Far East, a time of great loneliness and personal crisis for him. Volume two was inspired by his time in Spain and friendship with Federico Garcia Lorca, while in volume three Neruda finds his role as the monumental poet of the people. Residence on Earth is Pablo Neruda's greatest achievement, a poetry written to speak of everyday life directly to the reader, where Neruda found his public voice and espoused his political faith that solutions could be found to injustice and misery. Residence on Earth is Neruda's own poetic autobiography, his journey from modernism and surrealism to a poetic realism and commitment that makes him "the people's poet". Neruda's first great work and the expression of his mature voice, political, engaged and committed where Neruda speaks not only for the victims of repression such as his friend and fellow poet, Frederico Garcia Lorca, but for entire continents. The spontaneity and directness of Neruda's voice finds its great subject in Residence on Earth, as he became "the people's poet" addressing the reader with poems that are realistic and refer to the or-dinary, exalting the basic things of existence while speaking for a politically committed vision of a reformed world.

Pablo Neruda was easily the most prolific and popular of all twentieth-century poets... At his best, he is among the small group of last century's great poets. -- Mark Strand * New Yorker *
It is commonly observed of Pablo Neruda that he was a poet of rebirths... Donald D. Walsh's valiant 1973 translation... encompasses nearly all the possible Nerudas. -- Times Literary Supplement * . *

Pablo Neruda is the pen name of Neftali Ricardo Reyes Basoalto, he was born in 1904 and became a seminal figure in every poetry movement of the Twentieth century. He served also as a diplomat and ambassador for Chile and travelled extensively. He was awarded the Nobel Prize for Literature in 1971 and died in 1973.

GOR002322206
Residence on Earth by Pablo Neruda
Pablo Neruda
Used - Very Good
Paperback
Profile Books Ltd
2003-11-20
359
0285636871
9780285636873
N/A
Book picture is for illustrative purposes only, actual binding, cover or edition may vary.
This is a used book - there is no escaping the fact it has been read by someone else and it will show signs of wear and previous use. Overall we expect it to be in very good condition, but if you are not entirely satisfied please get in touch with us.