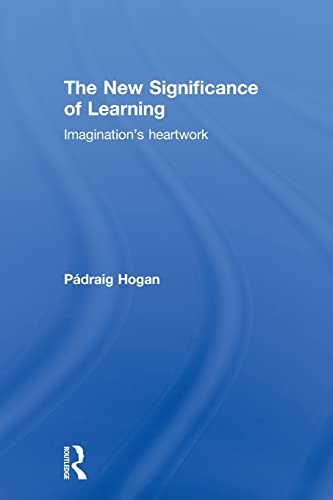 The New Significance of Learning
by Padraig Hogan

In Stock
$62.99
+10% GST
Reviews the restricting consequences of older and different forms of paternalism, in education, taking a historical perspective and offering a cohesive sustained argument.
Well Read
Only 1 left

The New Significance of Learning Summary

The New Significance of Learning: Imagination's Heartwork by Padraig Hogan

This book arises from a bold suggestion: that education is to be understood mainly as a practice in its own right, as opposed to a subordinate activity controlled largely by society's `powers-that-be'. Yet the long history of the practice has abundant examples that reveal just the latter. Many centuries of ecclesiastical control have cast teachers and pupils alike in an acquiescent role, and proclaimed a paternalistic order of things to be the natural one in the world of learning. In a secular age, a more mercantile credo gains ascendancy, but the hierarchical order of things in education essentially remains in place. Furthermore, international educational reforms in recent decades have done much to secure a major renewal of this order for the 21st century.

The New Significance of Learning draws on a wide range of insights from history, philosophy, literature and social sciences, in an accessible style. The author's analyses reveal a vacuity that lies at the heart of this renewed educational order, for all its conspicuous concern with excellence and its measurement. In response to this, the book seeks to uncover the eclipsed classical origins of education as a characteristic human undertaking with its own inherent purposes. The seminal power of these origins is revealed by aligning them with major contemporary insights, to elucidate a distinctly educational understanding of human understanding itself. The merits of such an understanding are explored in some detail, not least by reviewing some objections that might be brought against it.

The book proposes a more original understanding of education as a practice, and a number of examples suggest the merits of seeing it as a form of imaginative heartwork. This `heartwork' recognises the plurality of the human condition, but also emphasises the necessity to cultivate and sustain environments of learning which embody universally defensible practices. A central ethical orientation for educational practice thus emerges, which combines a commitment to progressive fluency with an educated sense of one's own ignorance, and, in turn, of the relative ignorance of humankind. Such an orientation identifies an overlooked significance for learning in an era where fundamentalisms have made headway internationally, not only in religion, but also in politics and in commerce.

Padraig Hogan is Senior Lecturer in Education at the National University of Ireland, Maynooth and Assistant Editor the Journal of Philosophy of Education.

PART ONE: EXPLORING EDUCATION AS A PRACTICE 1. The Harnessing of Learning - older and newer reins 2. A Postmodern Debility 3. The Integrity of Educational Practice 4. Disclosing Educational Practice from the Inside 5. Opening Delphi 6. Eros, Inclusion and Care in Teaching and Learning PART TWO: EXPLORING UNDERSTANDING IN EDUCATIONAL EXPERIENCE 7. Understanding in Human Experience 8. Cultural Tradition and Educational Experience 9. Giving Voice to the Text 10. The New Significance of Learning 11. Neither Born nor Made: The Education of Teachers 12. Imagination's Heartwork

GOR010109478
The New Significance of Learning: Imagination's Heartwork by Padraig Hogan
Padraig Hogan
Used - Well Read
Paperback
Taylor & Francis Ltd
2009-11-05
198
041554968X
9780415549684
N/A
Book picture is for illustrative purposes only, actual binding, cover or edition may vary.
This is a used book - there is no escaping the fact it has been read by someone else and it will show signs of wear and previous use. Overall we expect it to be in very good condition, but if you are not entirely satisfied please get in touch with us.