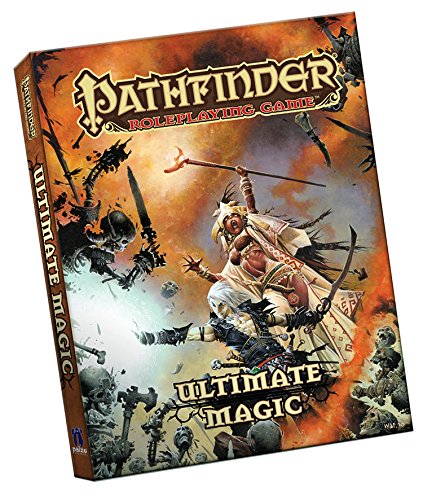 In Stock
$70.99
inc. GST
Unveils the magical secrets of the Pathfinder rules. This book offers tons of tricks and techniques for every spellcasting class in the game ranging from arcane secrets uncovered by studious wizards to dazzling ki-tricks performed by canny monks to mutagens for alchemists, oracle mysteries, specialized channel energy options for clerics, and more.
Very Good
Only 2 left

Raise your character to the pinnacle of magical might with Pathfinder RPG Ultimate Magic. Within this book, secrets arcane and divine lie ready to burst into life at the hands of all the spellcasting classes in the Pathfinder Roleplaying Game. In addition to the brand-new magus class-a master of both arcane magic and martial prowess-you'll also find a whole new system for spellcasting, rules for spell duels and other magical specialties, and pages upon pages of new spells, feats, and more. Because when it comes to magic, why settle for less than absolute power?
Pathfinder RPG Ultimate Magic is a must-have companion volume to the Pathfinder RPG Core Rulebook. This imaginative tabletop game builds on more than 10 years of system development and an Open Playtest featuring more than 50,000 gamers to create a cutting-edge RPG experience that brings the all-time best-selling set of fantasy rules into the new millennium.

GOR006067639
Pathfinder Roleplaying Game: Ultimate Magic by Paizo Staff
Paizo Staff
Used - Very Good
Hardback
Paizo Publishing, LLC
2011-06-07
256
1601252994
9781601252999
N/A
Book picture is for illustrative purposes only, actual binding, cover or edition may vary.
This is a used book - there is no escaping the fact it has been read by someone else and it will show signs of wear and previous use. Overall we expect it to be in very good condition, but if you are not entirely satisfied please get in touch with us.