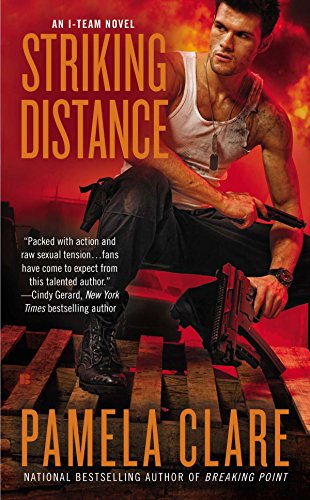 Her past is a secret--even to her.
Discovering it will be the most dangerous move of her life.

TV reporter Laura Nilsson, known as the "Baghdad Babe," spent eighteen months in an Al-Qaeda compound after being kidnapped live on the air. Two years later, she's still wondering why.

No mission in Javier Corbray's fourteen years as a Navy SEAL affected him the way Laura's rescue did. No woman had stirred his protective instincts the way she did. And he wants her more than he's ever wanted anyone.

As Laura and Javier's passion ignites, so does Laura's need to discover the mystery of her past. Especially when she learns that her abduction was not random--and that she's still a target for a killer with an impenetrable motive. Now Javier will have to rely on his skills to keep the woman he loves from being struck down before she dares uncover the truth.

Pamela Clare is a former newspaper journalist and author of the I-Team series, the MacKinnon's Rangers historical series, and the Kenleigh/Blakewell Family trilogy.

GOR005306607
Striking Distance by Pamela Clare
Pamela Clare
I-Team Novels
Used - Very Good
Paperback
Unknown
0
0425257355
9780425257357
N/A
Book picture is for illustrative purposes only, actual binding, cover or edition may vary.
This is a used book - there is no escaping the fact it has been read by someone else and it will show signs of wear and previous use. Overall we expect it to be in very good condition, but if you are not entirely satisfied please get in touch with us.