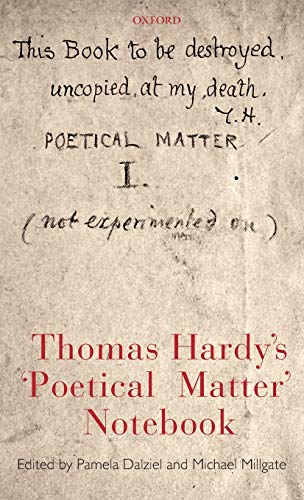 In Stock
$24.49
inc. GST
A meticulously prepared and annotated edition of a previously unpublished and almost unknown Hardy notebook, one of the very few to have survived. Biographically significant because of its preservation of personal notes from old pocket-books subsequently destroyed, 'Poetical Matter' is a unique late working notebook devoted to verse.
Very Good
Only 3 left

Thomas Hardy's 'Poetical Matter' notebook, the last to be published from among the small group of notebooks not destroyed by Hardy himself or by his executors, has now been meticulously edited with full scholarly annotation. Through its inclusion of so many notes copied by Hardy from old pocket-books subsequently destroyed, 'Poetical Matter' reaches back to all periods of his life, and is especially valuable from a biographical standpoint for its expansion and enhancement of knowledge of Hardy's final years and for its preservation of such intimate records as his richly revealing memories of the Bockhampton of his childhood and his sexually charged impressions of a woman glimpsed during a trip on a pleasure steamer in 1868. Its special distinctiveness nevertheless lies in its uniqueness as a late working notebook devoted specifically to verse. Florence Hardy, Hardy's widow, recalled his having experienced a great outburst of late creativity, feeling that he could go on writing almost indefinitely, and 'Poetical Matter' bears direct witness to his actively thinking about poetry and projecting and composing new poems until shortly before his death at the age of eighty-seven. As such, it contains an abundance of new ideas for poems and sequences of poems and demonstrates Hardy's characteristic creative progression, his working variously with initial ideas, with gathered notes, whether old or new, and with tentative prose formulations, verse fragments, metrical schemes, and rhyme patterns, towards the writing of the drafts from which, yet further worked and reworked, the completed poem would ultimately emerge.

The editing throughout is superbly informative... gives the best insight we are likely to get into Hardy's working methods in manuscript * Seamus Perry, Times Literary Supplement *
the notebook offers a rich and vivid demonstration of the ways in which Hardy, astonishingly creative even into his mid-80s, worked persistently with ideas towards so many of the poems which were gathered into the remarkable final volume, Winter Words. With particular value from a biographical standpoint, we can catch tantalising glimpses of the mind of a genius work. * Geoff Ward, Western Daily Press *
a fascinating and thought-provoking miscellany of images and observations * English Studies *

Pamela Dalziel is Distinguished University Scholar at the University of British Columbia and General Editor of the Clarendon Dickens Edition. Her scholarly editions include Thomas Hardy: The Excluded and Collaborative Stories (1992), Thomas Hardy's 'Studies, Specimens &c.' Notebook (co-edited with Michael Millgate, 1994), and Dickens's Hard Times (in progress). Her monograph Visual Hardy: Representing Gender and Genre in the Illustrated Novels will be published in 2009. Michael Millgate retired from the University of Toronto with the honorific title of University Professor. His later work-as critic, biographer, and editor-has been primarily devoted to Thomas Hardy. His Thomas Hardy: His Career as a Novelist appeared in 1971, Thomas Hardy: A Biography in 1982, Testamentary Acts: Browning, Tennyson, James, Hardy in 1992, and Thomas Hardy: A Biography Revisited in 2004. His editorial work has included the seven-volume Collected Letters of Thomas Hardy, co-edited with Richard Little Purdy (1978-88), The Life and Work of Thomas Hardy (1985), Thomas Hardy's 'Studies, Specimens &c.' Notebook, co-edited with Pamela Dalziel (1994), Letters of Emma and Florence Hardy (1996), and Thomas Hardy's Public Voice (2001).

GOR003242751
Thomas Hardy's 'Poetical Matter' Notebook by Pamela Dalziel (University of British Columbia)
Pamela Dalziel (University of British Columbia)
Used - Very Good
Hardback
Oxford University Press
2008-07-01
158
0199228493
9780199228492
N/A
Book picture is for illustrative purposes only, actual binding, cover or edition may vary.
This is a used book - there is no escaping the fact it has been read by someone else and it will show signs of wear and previous use. Overall we expect it to be in very good condition, but if you are not entirely satisfied please get in touch with us.