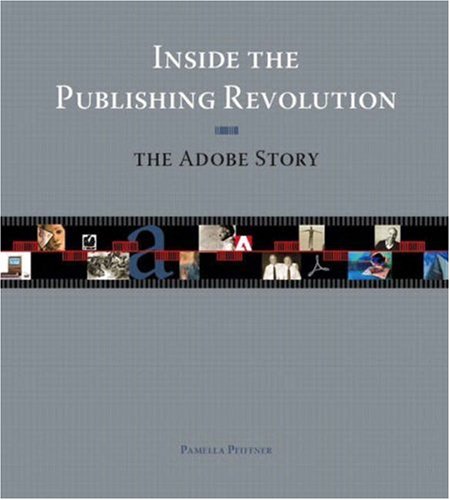 Inside the Publishing Revolution
by Pamela Pfiffner

In Stock
$72.99
inc. GST
Explores the history behind the modern publishing revolution, as seen through the lens of one of its most important players. This work takes you on a journey from the roots of the desktop publishing revolution through the rise of the Web and interactive design, the birth and evolution of PostScript, the explosion of the Photoshop market, and more.
Good
Only 1 left

Inside the Publishing Revolution Summary

Inside the Publishing Revolution: The Adobe Story by Pamela Pfiffner

Tech journalist Pamela Pfiffner explores the rich history behind the modern publishing revolution, as seen through the lens of one of its most important players. In the past 20 years, Adobe Systems has become synonymous with great design tools, and the company's impact on how we work in publishing, graphic arts, and on the Web is unmatched. Join Pfiffner on a colorful journey from the roots of the desktop publishing revolution through the rise of the Web and interactive design. Along the way, you'll witness the birth and evolution of PostScript, the explosion of the Photoshop market, the realization of the paperless office, and other events that have shaped the way we communicate.

Inside the Publishing Revolution is not one of those dull historical tomes you know and loathe from high school. Pfiffner packs its pages with lively, insightful interviews with world-class designers and illustrators, as well as personal insights and recollections from John Warnock, Chuck Geschke, Jonathan Seybold, and other publishing luminaries. Richly illustrated and beautifully designed, the book features galleries of historically significant work by leading artists and rare photographs from the Adobe archives. For added perspective, Pfiffner walks you through an illustrated timeline of the publishing revolution. As with history, the final chapter of the Adobe story remains to be written, so the book ends with an eye toward the future: an exclusive overview of the company's vision of publishing in the next decade.

Pamela Pfiffner's 14-year career in publishing encompasses print, Web, and television. She has been editor in chief of such magazines as MacUser and Publish, working to extend the publications' brands to the Internet. She joined the launch team of the 24-hour cable television station ZDTV (now TechTV) in 1997 as executive producer of its dynamic media Web site. In 1999 she launched creativepro.com as an independent portal for creative professionals.

GOR003647707
Inside the Publishing Revolution: The Adobe Story by Pamela Pfiffner
Pamela Pfiffner
Used - Good
Paperback
Pearson Education (US)
2002-09-16
256
0321115643
9780321115645
N/A
Book picture is for illustrative purposes only, actual binding, cover or edition may vary.
The book has been read but remains in clean condition. All pages are intact and the cover is intact. Some minor wear to the spine.