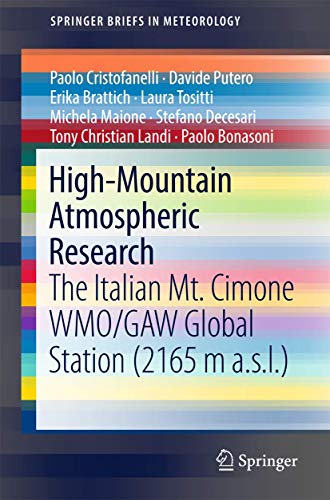 This book presents the results of 20 years of atmospheric composition research studies carried out at the high-mountain (2,165 m a.s.l.) Observatory "O. Vittori" in Italy, part of the only global station in the Mediterranean region that belongs to the World Meteorological Organization's Global Atmosphere Watch (WMO/GAW). It provides a comprehensive study with updated results for the most important atmospheric climate-altering and pollutant compounds based on the continuous observations at Mt. Cimone. Further, the book addresses the following main research topics in atmospheric sciences: non-CO2 greenhouse gases, reactive gases, aerosol particles and natural radioactivity.

The book also presents an overview of the measurement site (both in terms of its geographical location and technical facilities), as well as extensive climatology references (in the form of plots and tables) for the atmospheric compounds monitored there. As such, it offers a must-read for atmospheric scientists, stakeholders, undergraduate and graduate students in related fields.

Paolo Cristofanelli, researcher at the Institute of Atmospheric Sciences and Climate (ISAC) of the Italian National Research Council of Research (CNR), is head of the Climate Observatory "O. Vittori" ) at Mt. Cimone (2165 m a.s.l., Italy), one of the 31 global stations belonging to the Global Atmosphere Watch (GAW) programme by WMO and PI of investigation programmes on reactive gases at the WMO/GAW regional station of Capo Granitola (Italy). Currently, in the framework of ICOS (Integrated Carbon Observation System) European Research Infrastructure, he is PI for observations of CO2 and CH4 at Mt. Cimone. He is also working within the EU Project ACTRIS-2 (Aerosols, Clouds, and Trace gases Research InfraStructure Network). He is involved on research about detection and attribution of atmospheric composition variability (trace gases and aerosol) with a special emphasis on climate-altering and pollutant compounds (i.e. SLCF/P and well mixed greenhouse gases). Paolo Cristofanelli has more than 10 year experience in educational and outreaching activities by project related to primary and secondary schools, popularization events, seminars, public events and scientific outreaching by web. He is authors or co-authors in more than 55 peer-reviewed papers.

Davide Putero was born in 1987 in Turin, Italy. He graduated with honors in Physics (M.Sc.) at University of Turin in 2012. Since 2012, he has been working as a research fellow at CNR-ISAC in Bologna, Italy. He is currently a Ph.D. candidate in Geophysics at University of Bologna. His activity is focused on the investigation of the processes that modulate the atmospheric composition variability (short-lived climate forcers/pollutants, such as black carbon and ozone) at high-altitude remote regions (Himalayas and the Italian Apennines) and urban sites (e.g., Kathmandu, Nepal). In 2015, he has been a visiting researcher at the group of atmospheric dynamics at IAC-ETH in Zurich, Switzerland. At present, he is co-author of 6 scientific papers in peer-reviewed journals and one book chapter.

Erika Brattich is an assistant research fellow at the Department of Chemistry "G. Ciamician" of the University of Bologna since 2014. She graduated in Physics (M.Sc) at University of Bologna in 2010 and obtained the PhD degree in Earth Sciences at the University of Bologna in 2014. Her research activity focuses on the application of receptor modeling techniques based on large databases of chemical composition as well as on back-trajectories tools and the contemporary use of radioactive tracers to gain insights into the identification and quantification of particulate matter sources. These techniques have been successfully applied both in base research projects as well as on technical consultancies in the field of environmental forensics. In 2013 and 2016 she has been visiting researcher at the National Institute of Aerospace (Hampton, Virginia, USA; Dr. Hongyu Liu) to conduct research on atmospheric radionuclides seasonal and interannual variabilities using the GMI Chemistry and Transport model output. She was also visiting PhD student at the SCOLAb group (Applied Physics) at the University of Elche (Spain; Prof. Jose Antonio Garcia Orza) to establish links between atmospheric composition, large scale dynamics and atmospheric radioactivity. She is currently actively collaborating in the FRESA ("Impacto de las intrusions de masas de aire con polvo aFRicano y de masas de aire EStratosferico en la Peninsula Iberica. Influencia de El Atlas") Spanish National project (PI: Prof. Jose Antonio Garcia Orza, University of Elche, Spain), which aims to study the interaction between upper level disturbances and the Atlas Mountains in promoting low level instability and cyclone formation in the lee of the Atlas mountains. At present, she is co-author of 16 scientific papers in peer-reviewed journals.

Laura Tositti is associated professor of Environmental Chemistry at the University of Bologna (Italy). Her research focuses on the chemistry and radioactivity of atmospheric aerosols with the aim of apportioning their sources based on both experimental and modelling tools. In this framework, L. Tositti is responsible of several monitoring projects in both highly anthropized and remote sites, ranging from the Po valley to WMO-GAW "O. Vittori Station" at Monte Cimone (Italy). The common thread is the conjunct use of stable chemistry and radioactivity to successfully trace the origin and fate of airborne particulate. The activity at Monte Cimone has been conducted for more than twelve years in close collaboration with ISAC-CNR with the initial aim to support the study of stratosphere-to- troposphere exchange (STE) using airborne radiotracers. This niche approach was successfully applied in several EU projects focused on STE, but opened up to several other studies some of which still on-going, such as the apportionment of large scale sources of PM10 in the core of the Mediterranean area as well as the testing of circulation modeling using aerosol radiotracers in collaboration with NASA, without neglecting the characterization of Fukushima plume in the European airshed in 2011. Monte Cimone experience allowed also the early introduction of PM10 sampling in the mid 90's, when this metric was not yet popular in the European atmospheric research, setting the basis for the following development of her research topics. L. Tositti has been principal investigator in a number of projects in collaboration with the Environmental Protection Agency of Emilia Romagna aimed at apportioning aerosol sources in the Po Valley, one of the most polluted areas in Europe. In recent years she is largely involved as a consultant and principal investigator in source apportionment studies in the field of environmental forensics on behalf of several Italian courts. She authored more than 80 publications in peer-reviewed journals, reports for the local environmental agencies and attorneys and conference presentations.

The research of Prof. Michela Maione focuses on the changing composition of the atmosphere, and in particular on the atmospheric budget of ozone depleting and climate altering gases based on long- term observations. In this frame, M. Maione is responsible of monitoring programmes in remote and semi-remote sites, such as the WMO-GAW O. Vittori Station on Monte Cimone (Italy), the WMO-GAW NCO-P Station in the Himalayan Range (Nepal) and Dome C Station (Antarctica). The activity at Monte Cimone is conducted in collaboration with the AGAGE network, of which Monte Cimone is an affiliated station. Although the instrumentation used for halocarbon measurements is not the same as used at the other AGAGE stations, measurements are linked to the AGAGE calibration scale and the same calibration protocol as the AGAG E stations is used. The research covers a wide range of compounds, including all the Montreal Gases (CFCs, Halons, HCFCs, CH3Br, CH3CCl3), several Kyoto gases (HFCs, PFCs, SF6, CH4, N2O), short-lived brominated species (CH2Br2, CHBr3), chlorinated solvents, CO, COS, SO2F2, and anthropogenic NMHCs. These studies have been conducted in the frame of several National and International projects in which M. Maione has been involved acting as Principal Investigator of the research unit. Moreover, from 2004 to 2009 M. Maione has been in charge for the scientific secretariat of the European Network of Excellence ACCENT, involving 42 European partners and 123 associated partners, dealing with research activities concerning the role of atmospheric composition changes in climate change and air quality. Such activity is now conducted in the frame of a EU funded Coordinated Action, ACCENT Plus, funded by the EU-FP7. M. Maione participated in four scientific expeditions to Antarctica and in two scientific expeditions to the Arctic. She authored ca 80 publications in peer-reviewed journals and a number of book chapters and conference presentations. She is co-editor of the Atmospheric Environment Special Issue "Atmospheric Composition Change" (Atmos Environ, 43, 2009).

Dr. Stefano Decesari is researcher at the Institute of Atmospheric Sciences and Climate (ISAC) of CNR. Aged 44, he is author or co-author of 92 peer-reviewed publications (H-Index = 41). He is a specialist of atmospheric particulate matter chemical composition, and he developed original analytical methodologies for organic aerosol characterization. He took part to 10 EU research projects, other three international and two national (Italian) ones. He coordinated three intensive field experiment involving about 40 foreign research groups in the frame of the EC projects EUCAARI and PEGASOS. He has coordinated one EU project, "Himalayan Brown Carbon" (FP7 MSC IEF) dealing with light-absorbing aerosols in the high Himalayan environment. On 2014 he won the Haagen-Smit Prize for co-authorship of the paper "European aerosol phenomenology-2: chemical characteristics of particulate matter at kerbside, urban, rural and background sites in Europe" published on Atmospheric Environment. At present, he is coordinator of the project "IPA-BC/Monitor" (POR-FESR, Emilia-Romagna, ~1 MEURO).

Tony Christian;mso-ascii-theme-font:minor-latin;mso-hansi-theme-font: minor-latin;mso-bidi-theme-font:minor-latin"> Landi got the PhD in Physics on 2012 at the Center of Excellence for the forecast of Severe Weather (CETEMPS) - University of L'Aquila. On 2006, he got the Master Degree in Environmental Sciences (summa cum laude) at University of Naples "Parthenope". His thesis was recipient of the 2006 Best Remote Sensing Thesis Award by the IEEE GRS South Italy Chapter. His main research interests are focused on atmospheric chemistry with a particular emphasis in the understanding of the processes that control the atmospheric budgets of aerosols and gases that play a key role in the context of global climate change and in regional air quality. He is an expert on 3-D computer models of atmospheric processes that affect chemical species and analysis of data from both in-situ and remote- sensing instruments. Tony Christian Landi is author or co-author of 16 scientific peer-reviewed papers. He is author of Italian Patent n.0001384527 entitled A method for the detection of electromagnetic spectral signature during wild land fires, based on emission from trace elements in biomass tissues.

GOR010373514
High-Mountain Atmospheric Research: The Italian Mt. Cimone WMO/GAW Global Station (2165 m a.s.l.) by Paolo Cristofanelli
Paolo Cristofanelli
SpringerBriefs in Meteorology
Used - Very Good
Paperback
Springer International Publishing AG
2017-07-28
135
3319611267
9783319611266
N/A
Book picture is for illustrative purposes only, actual binding, cover or edition may vary.
This is a used book - there is no escaping the fact it has been read by someone else and it will show signs of wear and previous use. Overall we expect it to be in very good condition, but if you are not entirely satisfied please get in touch with us.